Satyameva Jayate 2 was released on November 25. 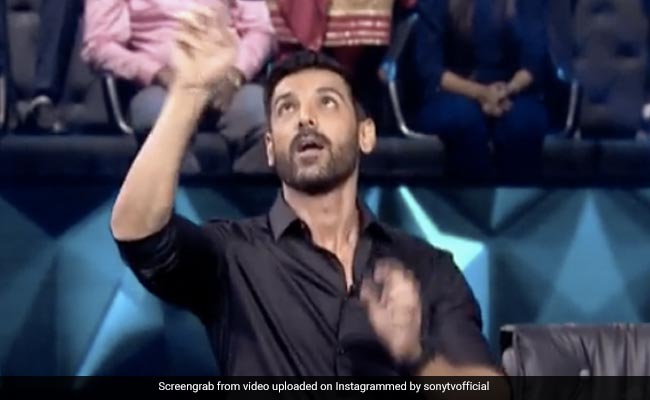 John Abraham and Divya Khosla Kumar are busy these days promoting their film Satyameva Jayate 2. And, now the stars have graced the stage of Kaun Banega Crorepati 13. The video shared by the makers of Instagram features John Abraham, Divya Khosla Kumar, producer Nikhil Advani along with the host of the show, veteran actor Amitabh Bachchan. In the clip, we see Big B asking Divya how she is feeling about being on the show. To this, the actress says, “Sir, bahut unreal lag raha hai. Main school main thi jab KBC start hua tha original. [It feels so unreal. I was in school when KBC started].” Amitabh Bachchan, who is known for his humour, quickly replies, “Dhanyavad aapke bata dia aapne ki humari umar kitni ho gai hain [Thanks for giving an idea about my age.].”

Next, we have John Abraham in the house. The actor, who was excited to be on the show, said that he is happy to see Amitabh Bachchan. “I am happy to see you. Aap bahut positive ho. [You are a positive man]”.

John Abraham also showed off his football skills in front of the audience on Amitabh Bachchan's special request. At first, John Abraham spins the ball on the tip of his finger. And, then, he shows off his tackle skills. Impressive, isn't it? And, what happened next didn't surprise us at all.  Amitabh Bachchan tried his hands at spinning the ball. Wow. The veteran actor takes the ball and spins it in the air. He then tries to manage it on the tip of his finger. Oops. Didn't work out.

Well, this was the fun part of the show. Now, it's time to look at something serious. John Abraham opened up about his college days when he used to play Taekwondo to earn money. And, how he ended up getting hurt badly during one of his fights in Thailand.

“College mein main Taekwondo karta tha. Tabhi paise jamma kar ke main Thailand gaya aur ye Muay Thai, jo ek free form of martial arts hai, usme main kickboxing karta tha....Just for invitation rounds paise kamane ke liye. [When I was in college, I used to train in  Taekwondo. Later, I went to Thailand and performed Muay Thai, a form of martial arts, just for the sake of money] Showing a scar on his chest, the actor added, “Ek round main, mujhe ek boxer ne yaha paar [chest] a kar kick kia...Aur yeh phatt gaya tha. [During one of the rounds, a boxer kicked me on the chest and then this part got torn].”

Satyameva Jayate 2 has hit the theatres on November 25.  The film is directed by Milap Zaveri.