The actor was also asked to flex his muscle power by cracking a walnut with bare hands. 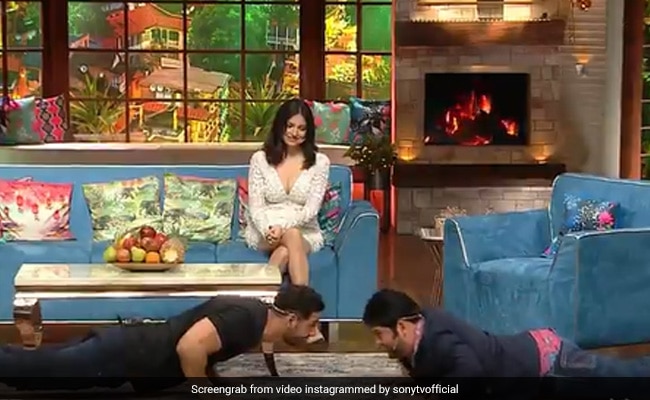 Film promotions for Satyameva Jayate 2 are getting more interesting by the day. John Abraham, who will share the screen space with Divya Khosla Kumar in the film, recently appeared on Kapil Sharma's show for the promotions. What's next? The three got into banter for the major part of the show. What split us into laughter is a push-up challenge between John Abraham and Kapil Sharma. Do we need to say who won it? In a video, we see that the comedian gives up in the very first push up while the uber-fit Dhoom actor seems a little bothered by the face-off. Later, John Abraham is also asked to show off his muscle power by cracking a walnut with his bare hands.

While John Abraham steals a lot of our attention, we can't really take our eyes off Divya Khosla Kumar. The actress' stunning beauty is praised by Kapil Sharma in his signature funny style.

Kapil Sharma also ends up asking John Abraham about dieting tips. He says, "Agar ek admi ko ek mahiney main 5 kg wazan kam karna ho, kya karna chahiye [If a man wants to lose 5kg weight in one month, what should he do?)" John Abraham gets to know that the comedian himself wants to lose weight in this way. So, the actor suggests that he will etch out a diet chart for Kapil Sharma after the show. In disbelief, the comedian ends up saying that he is so popular that John Abraham turns into a dietician for him.

Here is the promo video:

Earlier, John Abraham and Divya Khosla Kumar made an appearance on Kaun Banega Crorepati. The quiz show is hosted by Amitabh Bachchan. Viewers witnessed John Abraham flexing his muscles and showing some tricks with a football. The actor has also shared an anecdote from his visit to Big B's house.

John Abraham was also a part of Satyameva Jayate, which was the first instalment of the movie series. It was released in 2018. He was last seen in the film Sardar Ka Grandson, co-starring Aditi Rao Hydari, Arjun Kapoor and Rakul Preet Singh. His next project includes Ek Villain Returns.