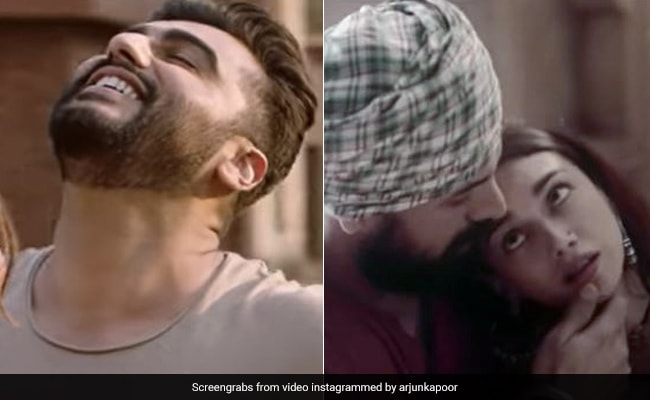 A week after the release of first track Jee Ni Karda from the upcoming film Sardar Ka Grandson, the makers have dropped a new song titled Main Teri Ho Gayi today. While Jee Ni Karda is a peppy dance number, Main Teri Ho Gayi is for romantic music lovers which will "make your heart melt with joy." On Monday, Arjun Kapoor, who is playing the lead role in the movie, shared the video of the song on his Instagram handle. He wrote, "The epitome of true love is here. #MainTeriHoGayi will make your heart melt with joy. Song out now!"

The song, set in two different eras, features Arjun Kapoor, Rakul Preet, John Abraham and Aditi Rao Hydari. The track takes us to the flashback where we see a beautiful love story between John and Aditi's characters who have built their home with love and emotions in Lahore. We also get a few glimpses of romance brewing between Arjun and Rakul's characters in present times.

Coming back to Main Teri Ho Gayi, the track is a recreation of Punjabi singer Milind Gaba's 2017 song of the same name. Milind Gaba and Pallavi Gaba have sung the new song. Music composer Tanishk Bagchi has recreated the track in the film. Tanishk has also added some lyrics to it.

Meanwhile, Jee Ni Karda, the first song of Sardar Ka Grandson was released on April 25. The track is a recreation of the song Dhoor by singer Manak-E and is sung by Punjabi singer Jass Manak. Arjun and Rakul as "baraatis" can be seen grooving to the Punjabi track in a wedding. Both Arjun and Rakul had shared the video on their respective Instagram handles back then.

Take a look at their posts here:

The trailer of Sardar Ka Grandson was released on April 21. Apart from Arjun Kapoor, Rakul Preet, John Abraham, Aditi Rao Hydari and Neena Gupta, the film also features Kanwaljit Singh, Soni Razdan and Kumud Mishra in key roles. The film is directed by Kaashvie Nair and is produced by John Abraham. It will release on Netflix on May 18 this year.

Arjun Kapoor also has films like Bhoot Police and Ek Villain Returns coming up. Rakul Preet is gearing up for movies such as Ayalaan, Attack, Mayday and Thank God.