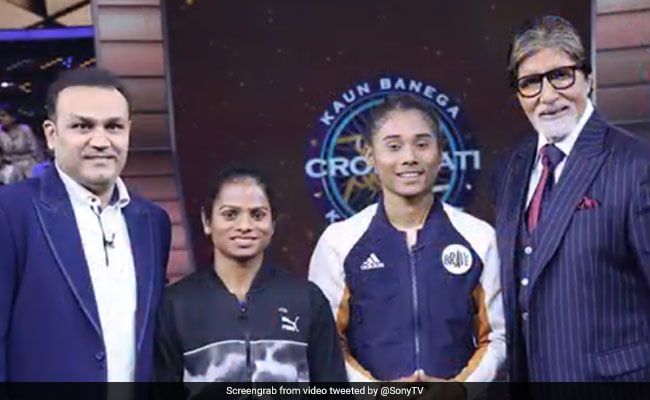 Tonight's episode of the popular quiz showKaun Banega Crorepati 11 was anything but ordinary as the show's host Amitabh Bachchan welcomed three special guests. The first two guests to play with Mr Bachchan were sprinters Hima Das and Dutee Chand. In another segment of the show, legendary cricket player Virender Sehwag joined Big B. They went home with a whopping amount of Rs 12, 50, 000. On tonight's episode, a special segment was organised, wherein members from the audience asked a few questions to the champions. During that round, Dutee Chand was asked who her favourite Bollywood actor is. Without much ado, Dutee Chand took Big B's name. An overwhelmed Mr Bachchan asked the audience: "Kisne poocha ye question?"

During the episode, Mr Bachchan played the videos from Dutee Chand and Hima Das' winning moments. Big B said that seeing the glimpse from those moments gave him goosebumps and that the entire country is proud of the Karamveer contestants.

Before welcoming the Karamveer's on the show in tonight's episode, Big B hosted yesterday's roll-over contestant Narendra Kumar. He gave the wrong answer and as a consequence of which he had to exit the game with Rs 3,20,000. On tonight's episode the experts that helped the contestants were - Journalist Rajiv Makhni and author and quizzer Archana Garodia Gupta, who helped the contestants who resorted to the Ask The Expert helpline.

Some of the questions asked in tonight's episode of Kaun Banega Crorepati 11 were:

Which state announced 5 percent reservation for Gurjars in February 2019?

Which of these Gallantry award is conferred by the Government of India on Republic Day?

Who became the 17th Chief Minister of Andhra Pradesh in May 2019?

In which of these Olympic Events is the longest distance covered?

Which Indian's 100m Asian Games record did Pakistani sprinter Abdul Khaliq break in 1954 and was called the "Flying Bird Of Asia" by Nehru?

Watch this space for more updates on Kaun Bange Crorepati 11.