Amitabh Bachchan kick-started the game with Chitrarekha, who hails from Chhattisgarh 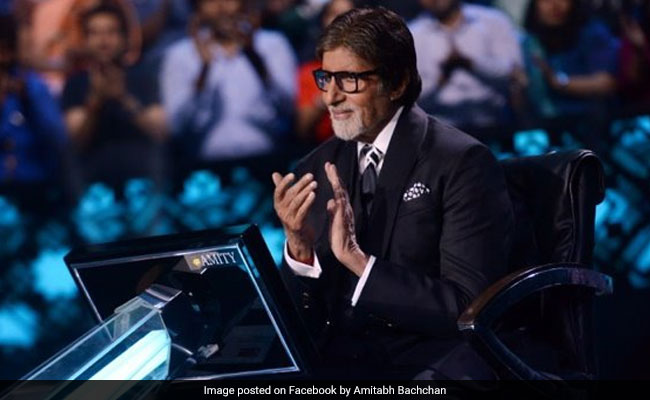 Tuesday's episode of Kaun Banega Crorepati kicked-off with contestant Chitrarekha Rathore from Chhattisgarh. Ms Rathore, who clearly had plenty of fun on the show, shared how her husband faced a loss of over Rs 6 lakh while trying his luck in spices business. Chitrarekha revealed to host Amitabh Bachchan that her husband took a loan of Rs 6 lakh and brought spices but couldn't sell them. When Big B asked her if she will use the prize money to repay the loan, Chitrarekha came up with an epic reply and said: "Kuch nahi dungi Sir inhe." After a brief chit-chat session, Amitabh Bachchan started the quiz with Ms Rathore, who played till the 7th question in the debut episode of Kaun Banega Crorepati 11.

Chitrarekha, unable to answer the 9th question, went for Ask The Expert lifeline and took the help of expert Pankaj Pachauri. She again used the Flip The Question lifeline for her next question. For those who don't know, a contestant will get to choose a category if they will select the Flip The Question lifeline. Of the 11 categories of topics, Chitrarekha chose Entertainment as her topic of interest. By answering the 10th question correctly, Chitrarekha won Rs 3,20,000 and unlocked the jackpot stage. However, she quit the game and went home with a prize money of Rs 6,40,000.

Taking the game ahead, Amitabh Bachchan asked the contestants another Fastest Finger First question and GST Officer Vivek Bhagat from Bangalore won the round. Curious Big B said he is impressed with Vivek's profession and asked him about the duties and roles of a GST officer.

Vivek breaks it down for you all! GST isn't as difficult as we imagine it to be! That's the magic of KBC! You learn from everywhere#KBC11@SrBachchan

Vivek successfully answered the first 9 questions but faced a little difficulty while attempting the 10th question. He went home with a prize money of Rs 10,000. After clicking a selfie with Vivek, Big B asked the contestants second Fastest Finger First question. Saroj Sisodia, teacher from Udaipur, Rajasthan, won the round by answering the question quickly.

Saroj was briefed about the rules of the game and before Big B could ask her the 3rd question, the buzzer went off. Saroj Sisodia will continue the game in the third episode, which will air on Sony from 9 pm to 10:30 pm.