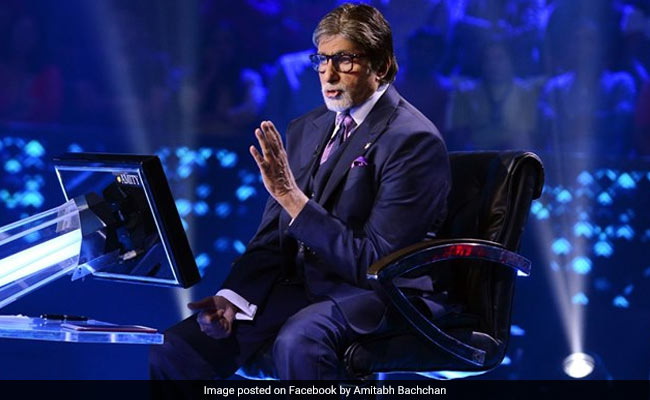 Amitabh Bachchan is back with the much-awaited television show Kaun Banega Crorepati 11, which aired on Sony Entertainment Television on Monday. The actor, who hosts the show, kick- started it with a heart-warming poetry and introduction of all the contestants, who came from different parts of India. The first part of the game, Fastest Finger First, which included a question about arranging events of 2019 in chronological sequence, was answered correctly by Anil Rameshbhai Jivnani , a contestant from Gujarat. Host Amitabh Bachchan briefly explained the stages and rules of the game to Anil Jivnani, a former gym trainer. He then introduced the expert of the episode Richa Anirudh.

For those who don't know, here's quick information about the rules and the lifelines. The contestant will get four lifelines - 50:50, Audience Poll, Ask The Expert and Flip The Question. They will win 1 crore after answering 15 questions correctly. The final question comes with a prize money of 7 crore. The contestants will get 45 seconds to answer each question allotted in Level 1 and a minute each for questions in the second round.

Anil Rameshbhai Jivnani used his first lifeline audience poll after he was unable to answer the third question and continued to use 50:50 and Ask the expert lifelines also till the fifth question. He survived to play 10 questions and went home with a prize money of Rs 10,000 after a steep fall from level 2.

Oops! That was a steep fall! Anil Bhai returns with only Rs10,000! #KBC11@SrBachchan

Taking the game ahead, Big B asked the contestants another Fastest Finger First question. Chitrarekha Rathore, a Homeopathy doctor from Chhattisgarh won the round. Before starting the quiz, Big B showed a video on Chitralekha's life, in which she can be seen talking endlessly about her family. Amitabh Bachchan also shared an anecdote with Chitrarekha and said that he has lived in Kolkata for over 7 years and worked as an executive at a firm there. He further listened to Chitrarekha's complaints about her husband over forgetting their anniversary and gave her husband a relationship advice."Take oath that you will brings things for her by yourself without a reminder," Big B told Chitrarekha's husband.

Chitrarekha won Rs 40,000 by answering the 7th question correctly. Before Amitabh Bachchan could ask her the 8th question, the buzzer went off. Chitrarekha will continue the quiz on the hot seat in the next episode.

Kaun Banega Crorepati will air on Sony from 9 pm to 10:30 pm from Monday to Friday.