Katrina Kaif Is Busy With Chores At Home. This Is What She Did After Washing The Dishes 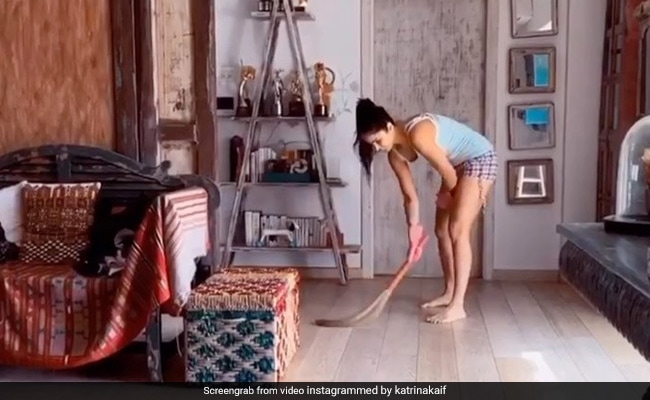 A still from the video shared by Katrina Kaif. (courtesy: katrinakaif)

After washing the dishes and productively utilising the time at home, Katrina Kaif was cleaning the floor with a broom during quarantine. The 36-year-old actress shared a video, in which she can be seen standing with a broom in one hand as she swept the floor and her sister Isabelle Kaif can be heard saying, "We're all doing our part." Isabelle added, "Uh, those brooms also shed a little bit." Katrina Kaif captioned her video, "Day 21 - One day at a time guys...We all gotta do our part...apparently Isabelle Kaif's part is to give commentary and pro tips while seated. Gotta mix it up...This is seriously good exercise btw." "Kuch der baad (Moments later)" read the video cutting into a scene, in which Katrina started virtually playing cricket with the broom as she swung it into the air. She used the hashtags "Stay home" and "Help out at home" on the post. Here's the video we're talking about:

Earlier, the Bharat actress posted a video on her Instagram profile which featured her in the kitchen washing the dishes. Take a look:

During quarantine, Katrina Kaif has been taking good care of her fitness as well. She has been working out at home and sharing glimpses of her workout session on her social media handle.

#WorkoutFromHome Can't go to the gym so ets @reebokindia #reebok

On the work front, Katrina Kaif was last seen in Ali Abbas Zafar's 2018 film Bharat opposite Salman Khan. She will next be seen in Rohit Shetty's Sooryavanshi co-starring Akshay Kumar in the film.