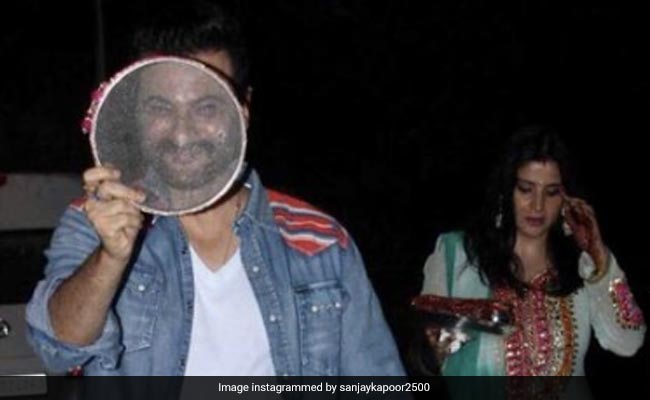 Sanjay Kapoor shared a set of throwback pictures from previous years' Karwa Chauth festivities to wish his wife and Fabulous Lives Of Bollywood Wives star Maheep Kapoor. On Thursday, Sanjay shared three different pictures from Karwa Chauth festivities in past on his Instagram handle. He captioned it, "Happy Karwa Chauth" with a red heart and also tagged his wife Maheep Kapoor. In the pictures, Sanjay Kapoor can be seen sporting casual outfits, while Maheep can be seen wearing ethnic outfits. In the first picture, Sanjay can be seen posing with a sieve, while Maheep can be seen walking behind him. The next picture shows the couple at their candid best, while in the third picture, Sanjay and Maheep can be seen posing for the camera.

A few hours ago, Maheep too shared a throwback post on her Instagram handle. Maheep shared a set of pictures from her Karwa Chauth festivities in the past years. Sharing the post, Maheep wrote, "Happy Karvachauth ladies." Her caption was accompanied by the hashtags Throwback Memories and Spot The Moon.

Coming back to Sanjay's post, the actor often shares pictures with his wife Maheep on various occasions.

Check out a few posts here:

Sanjay Kapoor, who is the younger brother of film producer Boney Kapoor and actor Anil Kapoor married Maheep Kapoor in 1997. The couple are parents to Shanaya Kapoor and Jahaan Kapoor.

On the work front, Sanjay Kapoor was last seen in the Netflix series The Fame Game, also starring Madhuri Dixit in the lead role. He also made an appearance in his wife Maheep Kapoor's Netflix show Fabulous Lives Of Bollywood Wives Season 2.