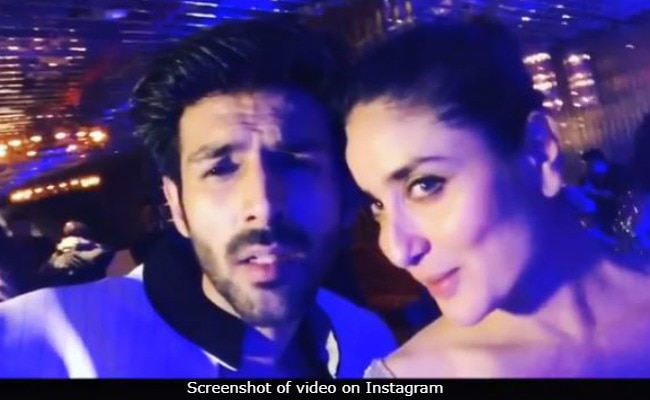 New Delhi: Kartik Aaryan and Kareena Kapoor recently walked the ramp for Manish Malhotra in Singapore - and the duo had plenty of fun at the backstage. The Pyaar Ka Punchnama actor roped in Kareena for an Instagram video - he lip-synced to Ban Ja Tu Meri Raani while Kareena kept him company throughtout. Now on Instagram, Kartik's post reads: "Ban jaa tu meri Rani," which has quickly been noticed by fans and flooded with cautionary warnings about flirting with Kareena, who is eight years older and married to Saif Ali Khan. "Someone tag Saif Ali Khan in here," read a comment while another added: "Kisi aur ki rani hai wo." Here's what another user said: "Kareena ji already rani hai kisi ki unko rani maat banao!"

Shared on Wednesday afternoon, Kartik Aaryan's video has garnered over 372,476 views and thousand comments in just two hours, most of which have reviewed the video as "cute" and "adorable" and has also requested that the two be cast in a movie together soon. "You guys are looking fabulous. We all want to see you guys together in the movie," said one user and another one wrote: "Both are looking so adorable.., Love u both... Why can't you do a movie together?"

Promoted
Listen to the latest songs, only on JioSaavn.com
The Manish Malhotra show, held earlier this week, saw Kareena set the ramp on fire in an embellished lehenga and bra-let while Kartik complemented her in a blue bandhgala and pants. Photos from the show have also previously made Kareena trend after a section of the Internet decided to troll the actress for looking "malnourished" and "like a skeleton."

Kartik Aaryan, who is six-films-old in Bollywood, was last seen in Sonu Ke Titu Ki Sweety. Kareena Kapoor will next be seen in Shashanka Ghosh's Veere Di Wedding, which also stars Sonam Kapoor and Swara Bhaskar.