What happened when Kartik Aaryan and Jacqueline Fernandez met in Bulgaria 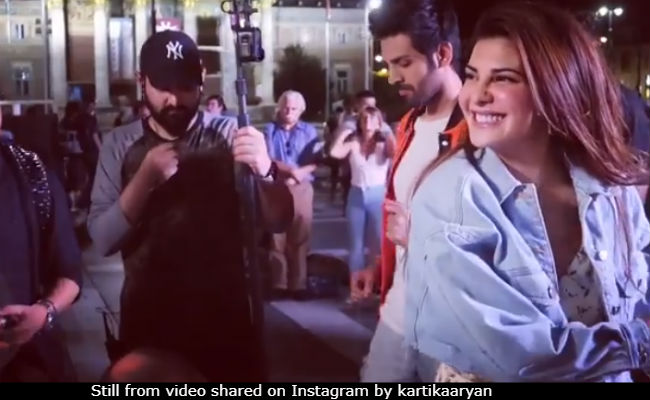 Sabka favourite Kartik Aaryan often manages to have interesting encounters with his colleagues, with Jacqueline Fernandez being the recent one. From both Jacqueline and Kartik's Instagram accounts, it appears that they are currently busy with a shoot in Bulgaria. But what's more interesting than that is a hilarious video shared on Jacqueline's Instagram and reposted on Kartik's timeline. "Baal baal bach gayein. Quite KICKed to meet you," read the caption on Kartik's post while Jacqueline said: "Jab we met. Kartik Aaryan, nice to meet you!" The video reveals Jacqueline gets quite animated while prepping for her shot as directed by filmmaker Siddharth Anand when Kartik appears in the frame.

Unaware of Kartik's presence, an over-enthusiastic Jacqueline almost ends up hitting him by mistake, in turn, spoiling Kartik's freshly-made hair. If this was their "jab we met" story, can we say their ice-breaking moment was pretty darn hilarious? Shared earlier today, the video has over 2,74,847 'views' in just three hours on Kartik's timeline while Jacqueline's is almost at 3 lakh 'likes' in over half a day.

Jacqueline Fernandez is rumoured to be Kartik Aaryan's co-star for the Hindi remake of superhit Kannada film Kirik Party but no official announcement about the actress has been made so far.

Earlier this year, another Instagram post which made fans of Kartik Aaryan experience some sort of a meltdown. It was from when he sang "Baan ja tu meri raani" to Kareena Kapoor during a fashion party in Singapore.

On the work front, Kartik Aaryan just began filming Luka Chuppi, his film with Kriti Sanon, which releases in March next year. His Kirik party goes on floors in October while he's also reportedly been roped in for Aankhen 2.