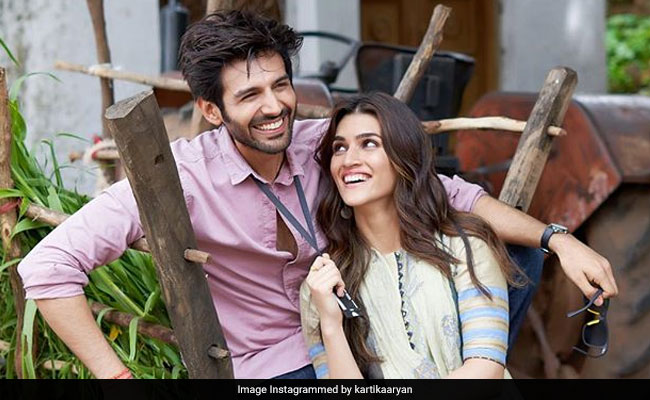 Kartik Aaryan and Kriti Sanon have started shooting for their next film Luka Chuppi. Kartik and Kriti shared the same photo from the sets of their film on their respective Instagram accounts, where the actors can be seen sharing a light moment with each other. Kartik Aaryan captioned the photo: "And Luka Chuppi starts, Day 1." The photo shared by the actors speaks a lot about the onscreen rapport that we are to witness in the theatres soon. Kartik Aaryan and Kriti Sanon are currently in Gwalior (as per their Instagram stories), where they are shooting the first schedule of the film. Luka Chuppi is being directed by Laxman Uthekar, who was the Director of Photography for Irrfan Khan's 2017 film Hindi Medium and has helmed two Marathi films earlier. This is the first time Kriti Sanon and Kartik Aaryan have collaborated for a project.

In Luka Chuppi, Kartik Aaryan plays a journalist while Kriti will be seen playing the role of a strong-headed girl from Mathura. The official announcement of the film was made on social media last month.

Kartik Aaryan and Kriti Sanon teamed in #LukaChuppi... Directed by Laxman Utekar... Produced by Dinesh Vijan... The story travels from Mathura to Gwalior and Agra... Kartik enacts the part of the star reporter of a local TV channel... March 2019 release... Official announcement: pic.twitter.com/niuW1woeXz