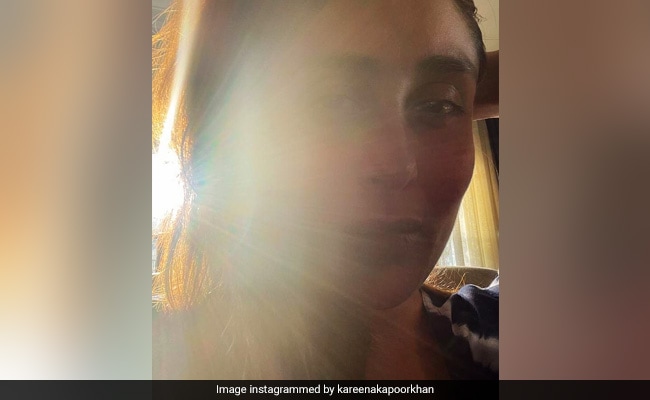 Kareena Kapoor updated her Instagram feed with a sun-kissed picture of herself on Saturday and needless to say, her fans loved it. The actress borrowed a few lines from Chris De Burgh's song Lady In Red for the caption but shared it with a twist. She wrote: "The highlights in your hair that catch your eyes...I have been blind. And no, I'm not the lady in red." Kareena Kapoor can be seen wearing a blue and white outfit in the photo, on which several of her fans dropped comments like "wow" and "gorgeous." One of the users wrote: "You are like a ray of sunshine."

Kareena Kapoor and Saif Ali Khan, already parents to a son named Taimur, welcomed their second child in February this year. The actress shared the first picture of her baby on Women's Day.

New mom Kareena Kapoor has been sharing stunning photos of herself since the birth of her second baby. Check them out here:

Kareena Kapoor made her debut in Bollywood with JP Dutta's 2000 film Refugee. She is known for her performances in films like Jab We Met, Ra.One, Tashan, Good Newwz, 3 Idiots, Heroine, Aitraaz, Kurbaan, Talaash, Asoka, Bodyguard, Omkara and Veere Di Wedding among others.

The actress will next be seen in Karan Johar's period drama Takht and Laal Singh Chaddha, in which she will share screen space with Aamir Khan. Both Laal Singh Chaddha and Takht are slated to release on Christmas this year.

Major: Salman Khan Launches Trailer Of Movie Based On 26/11 Braveheart