Here are more glimpses of Kareena and Taimur at the Pataudi Palace, as shared by Taimur's Spanish teacher 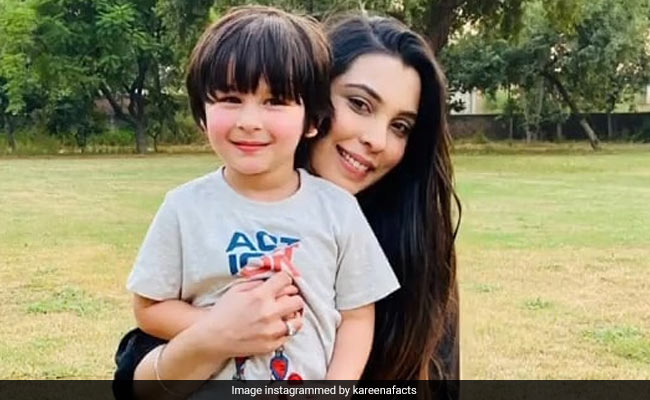 Kareena Kapoor just revealed what's keeping her son Taimur Ali Khan busy these days. On her Instagram story, Kareena shared an adorable photo of Taimur and his Spanish teacher Eshleen S Jolly and wrote: "We love Spanish." Kareena, who is pregnant with her second child, and Taimur are currently in the Pataudi Palace and looks like Taimur's Spanish tutor dropped by to pay them a visit. She shared a few photos on her Instagram stories, one of which she captioned: "Finally got to meet my Spanish student off screen." Taimur can be seen smiling ear-to-ear in the pictures. Here's what Kareena Kapoor shared on her Instagram recently: 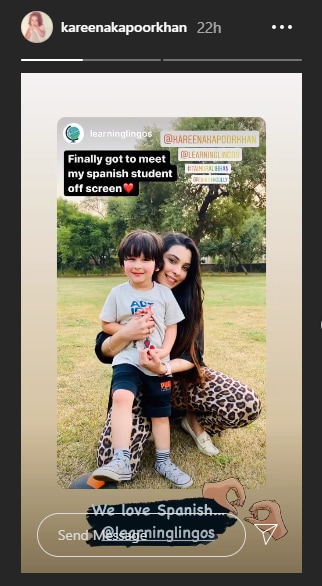 Here are more glimpses of Kareena and Taimur at the Pataudi Palace, as shared by Eshleen S Jolly:

The photos appear to have been clicked over the weekend as on Saturday, Kareena checked in on Instagram in the same chequered kaftan as seen in the previous photos. For the first time since the pregnancy announcement, Kareena revealed she's five months pregnant. "5 months and going strong. The kaftan series continues," she wrote.

Taimur also often features on Kareena's Instagram, making appearances in adorable posts. Kareena addresses him as the "in house Picasso", who is not only interested in Spanish but also in playing with colours.

Taimur also made a Lego Ganpati on Ganesh Chaturthi this year: "Ganpati celebrations might be a little different this year... But Tim made sure the festival was on point by making a beautiful Lego Ganeshji for us," Kareena captioned the photos.

Ganpati celebrations might be a little different this year... But Tim made sure the festival was on point by making a beautiful lego Ganeshji for us ❤️💯 Wishing you all a very happy Ganesh Chaturthi. Praying for peace, everyone's health and safety. ✨

Kareena Kapoor and Saif Ali Khan are expecting their second child - they made the pregnancy announcement in August. Kareena and Saif got married in 2012 and Taimur was born to the couple in 2016.