Inside The Kapoors' Ganesh Chaturthi Celebrations With Kareena, Karisma And Others. Taimur Stole The Show 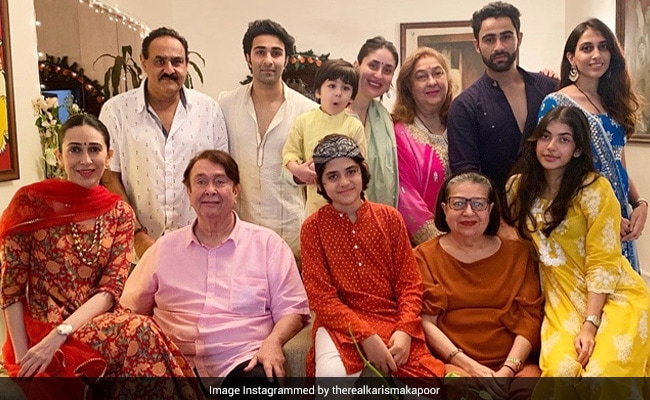 Trust Karisma Kapoor to always share the best fam-jam photos from the Kapoors' get-togethers. The 46-year-old actress recently shared a few glimpses of her Ganesh Chaturthi celebrations on Instagram and captioned the album as "Ganapati Darshan." Needless to say, with the Kapoors, any festival makes way for a family get together and that's exactly the emotion Karisma's sister Kareena Kapoor summed up in her caption: "No time like family time," she wrote. The Kapoor fam-jam photo features not only the Kapoor sisters but also Karisma's daughter Samiera, son Kiaan, and Kareena-Karisma's parents Babita and Randhir Kapoor. Reema Jain, her husband Manoj Jain and their sons Armaan and Aadar Jain also feature in the photo. Armaan can be seen posing with his wife Anissa Malhotra. All said and done, it's the youngest Kapoor member - Kareena's son Taimur - who stole the show.

Karisma Kapoor also shared this adorable photo of Taimur with his cousins Samiera and Kiaan, on her Instagram story. 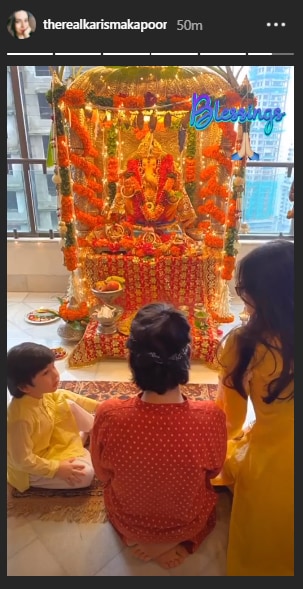 Kareena Kapoor and Saif Ali Khan recently announced they are expecting a new member to join their family of three: "We are very pleased to announce that we are expecting an addition to our family. Thank you to all our well-wishers for all their love and support." Kareena and Saif, who got married in 2012, welcomed Taimur in 2016.

On Rakhi, the Kapoors had a major fam-jam moment. Ranbir Kapoor's girlfriend Alia Bhatt and Aadar Jain's plus one Tara Sutaria were special guests.

Karisma Kapoor was last seen in 2012 film Dangerous Ishhq, after which she featured in special roles in films such as Bombay Talkies and Zero. Angrezi Medium was Kareena Kapoor's last film. She will next be seen in Laal Singh Chaddha.