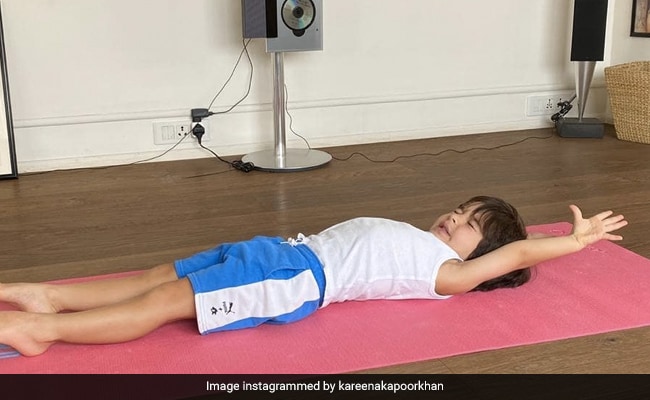 Kareena Kapoor shared a brand new picture of son Taimur on her Instagram profile on Saturday and cute can't even begin to describe it. The picture features Taimur lying down on a yoga mat. He can be seen sporting a goofy expression and he looks simply adorable. Kareena Kapoor, in her caption wrote that she is not sure if the little one is stretching out after yoga or a nap. Sharing the picture, she captioned the post: "Stretching after yoga or stretching after a nap... You'll never know." She added the hashtag #LockdownYoga. In the comments section, Taimur's aunt Saba Ali Khan wrote: "Love him ...Loads. Stay safe... My jaan Tim." The comments section was flooded with heart emojis from Kareena's Instafam.

Earlier this week, Kareena Kapoor shared a post-workout selfie and she wrote: "Get up and move it move it." ICYMI, this is the one we are talking about:

Kareena Kapoor and Saif Ali Khan welcomed a son on February 21. "We have been blessed with a baby boy. Mom and baby are safe and healthy. Thank you to our well-wishers for their love and support," Saif said in a statement.

Kareena and Saif Ali Khan married in 2012 after dating for some years. They announced their second pregnancy last August. They are co-stars of films like Omkara, Agent Vinod and Kurbaan and Tashan. The actress announced her pregnancy memoir titled The Kareena Kapoor Khan Pregnancy Bible, on Taimur's fourth birthday in December last year.