Kareena Kapoor Had A Visitor At Work - Taimur. He Just Dropped By, You Know

It was a work kinda day for the Kapoor sisters on Monday, when they were visited by someone really "special" and super cute on sets 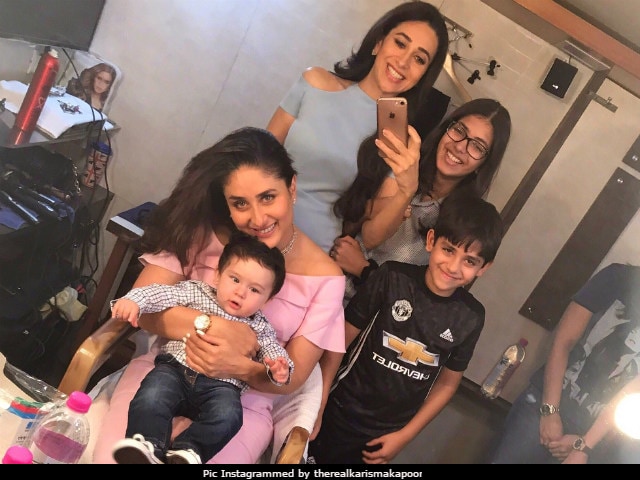 Nothing much, just Taimur being adorable (courtesy therealkarismakapoor)

New Delhi: Karisma Kapoor is not done sharing pictures from her shoot with sister Kareena Kapoor Khan yet. It was a work kinda day for the Kapoor sisters on Monday, when they were visited by someone really "special" and super cute on sets. No points for guessing who - it was Kareena's son Taimur. The little one adorably placed himself on his mother's lap and posed with the rest of the Kapoor clan - masi Karisma and her daughter Samiera and son Kiaan. "We had a special visitor on our set yesterday," Karisma Instagrammed with a picture, which we predict, will hardly take time to go viral.

In the picture, Taimur appears to have rightfully claimed his favourite lap in the world after after being away from his mother (she was at work) for a while. The other Kapoor kids seem to have dropped by after school to pick Kareena and Karisma from work. Post work, Karisma and Kareena headed out for a casual outing with their mother Babita and the kids.

Here are more posts from inside the Kapoor sisters' shoot diaries:

Promoted
Listen to the latest songs, only on JioSaavn.com
Kareena has been following a strict work-out regime to shed the post pregnancy weight since Taimur was born in December. Apart from hanging out with friends and attending showbiz parties, Kareena walked the ramp for designer Anita Dongre and shot an advert in London. The 36-year-old year actress has already been criticised for 'abandoning' and 'neglecting' her baby but Kareena being Kareena knows just how to handle haters. "We are capable of multitasking," she had told mid-day, abandoning professional commitments is not really a side-effect of embracing motherhood.

Kareena will next be seen Shashanka Ghosh's Veere Di Wedding, which has an ensemble cast comprising Sonam Kapoor, Swara Bhaskar and Wake Up Sid actress Shikha Talsania. Kareena recently joined the cast of the film, to be produced by Sonam's sister Rhea, for a script reading session.

Kareena Kapoor, Saif Ali Khan and Taimur touched down in Mumbai from a two-week Swiss vacation earlier this month and four days later, Saif celebrated his 47th birthday. This was Taimur's first vacation abroad. Born in 2016, Taimur will cut his first birthday cake in December this year.