Saif Ali Khan revealed Taimur likes to watch the moon, an activity they often do together 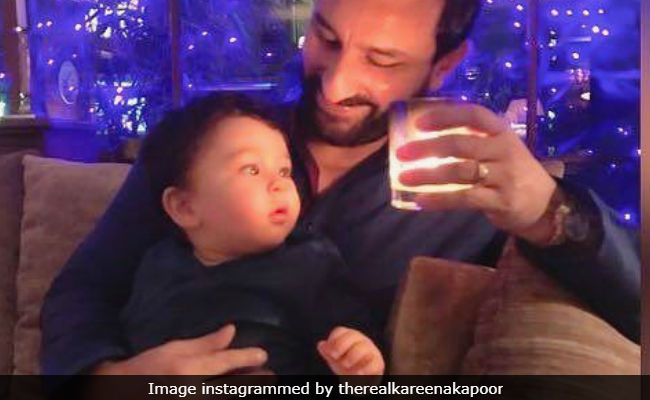 New Delhi: Kareena Kapoor and Saif Ali Khan's one-year-old son has learnt some new words and one of them is 'Abba' (which means father in Urdu), the Kaalakaandi actor told DNA. The other word which gets Taimur really excited is 'gum.' "He has learnt a few new words. He calls me 'abba' and has now started to say 'baby' and 'gum'. Whenever he sees a chewing gum, he would just scream 'gum'," Saif was quoted as saying. The little nawab is also a moon-gazer as per his 'abba,' who added: "He likes to watch the moon, so I sit with him in my office and show him the moon."

Taimur often finds himself on the trends list courtesy of pictures of him outside his play school and in the driveways of his relatives' apartments. Taimur's curious expressions are a treat for fans of the toddler. Saif Ali Khan is aware of Taimur's popularity and is happy that at least the "photographers are really friendly." He told DNA: "Taimur should be freely able to take his evening outing in the park. It becomes difficult in certain situations, but the photographers are really friendly. They are just doing their jobs and they don't push him or his nanny, which is really kind. They aren't aggressive so I'm happy."

Saif Ali Khan earlier told NDTV that he knew that there would be media interest in their son. "It's hard to bring up kids without the attention; I don't know how he is going to react to the attention when he grows up," he said.

Promoted
Listen to the latest songs, only on JioSaavn.com
Kareena and Saif never really guarded their son from the media like the way Rani Mukerji and Aditya Chopra refuse to let their daughter Adira being pictured (Rani blames Aditya Chopra for that) even on her birthday.