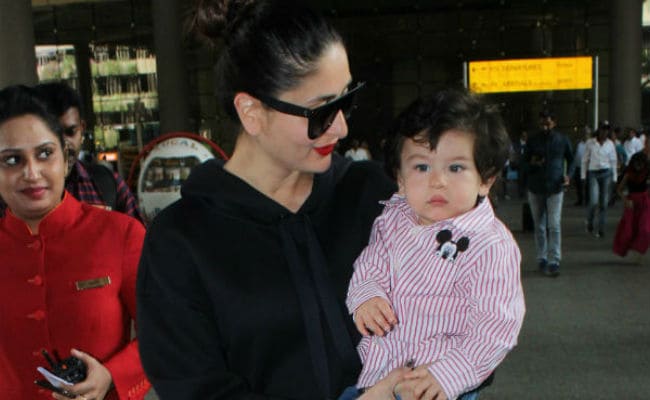 Kareena Kapoor and Taimur spotted at the Mumbai airport

New Delhi: "Akshay (actor Akshay Kumar), Taimur is a threat to you, I am telling you," Kareena Kapoor told her Tashan co-star at an award show held in Mumbai on Tuesday. In a now viral video, Kareena Kapoor can be seen telling Akshay Kumar how her one-year-old son Taimur could beat him at the box office if their films ever released together. "Even in your fan following he can surpass you. It's an open challenge," Kareena told Akshay, who was sitting in the audience. Kareena Kapoor's son Tamiur has been under the limelight from the day he was born - December 20, 2016. "It's scary," Kareena said, talking about Taimur's popularity. The 37-year-old actress added that when the time comes, she'd like Taimur to get a chance to prove himself.

Kareena Kapoor Khan talks about Taimur Ali Khan being the centre of the nation's attraction. She even joked by challenging Akshay..... Hahahhahaha #kareena #kareenakapoor

Fan clubs on social media, which are dedicated to Taimur, frequently post updates about his day-to-day activities. Pictures of Taimur outside his school and his playdate by the pool often send the Internet into a meltdown. The paparazzi also follow Taimur around the city for pictures.

Speaking to mid-day, Kareena Kapoor said that Taimur's popularity makes her "paranoid." She said: "So much attention on him is scary. The more I think of it, the more I want to put a kaala teeka on him. I don't want him to leave the house. But that's me going overboard. I control my feelings only so that my son can grow up like a regular kid. He deserves to have that chance sans any pressure."

A post shared by Taimur ali khan (@taimuralikhanpataudiakanawab) on Apr 10, 2018 at 2:43am PDT

"Saif and I discuss that our baby is bringing a smile to everyone's face. We see it in a positive light and move on," she added.

Promoted
Listen to the latest songs, only on JioSaavn.com
Taimur is Kareena Kapoor and Saif Ali Khan's son. Saif has two children with his first wife Amrita Singh - daughter Sara Ali Khan (an upcoming actress with two films in her kitty) and son Ibrahim Ali Khan.