"This is not Mumma's kurta. This is Dada's kurta," Karan can be heard saying to Yash and Roohi in the clip 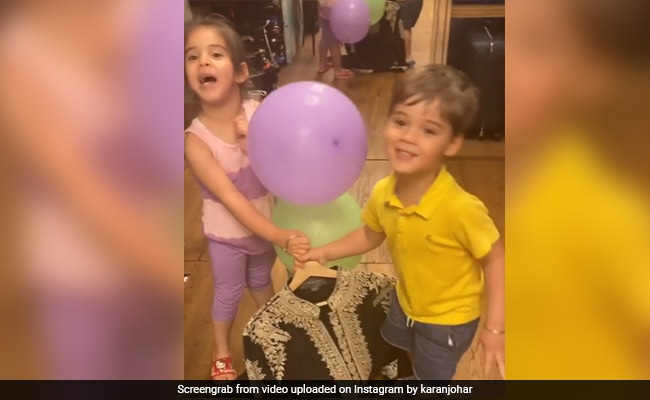 Yash and Roohi in a still from the clip. (Image courtesy: karanjohar)

Karan Johar and his kids Yash and Roohi are back again to entertain us with their fun-filled "toodles" videos. In the first episode of the second season of "Lockdown with the Johars," Yash and Roohi turned into Karan's fashion critics again and hilariously made fun of his kurta designed by Manish Malhotra. In the clip, Roohi and Yash can be seen holding a kurta and some balloons. When Karan asks them: "Excuse me, what are you'll holding?" they adorably reply: "Mumma's kurta." Karan, who couldn't control his laughter, then says, "This is not Mumma's kurta. This is Dada's kurta. Dada's friend Manish Malhotra has made it for me. Do you think this is Mumma's kurta? No, please don't say that to Dada, please."

Sharing the video, Karan Johar wrote: "Now they think I am wearing my mother's clothes! #lockdownwiththejohars #season2 #toodles #weareback." Reacting to his post, his filmmaker friend Farah Khan also hilariously criticised his fashion sense and commented: "To be fair... so do I sometimes."

Karan Johar and his kids always crack us up with their ROFL "toodles" videos. They recently took a break from it but we are glad that they are back again. In the first season of "Lockdown with the Johars," Yash and Roohi hilariously made fun of Karan Johar's physique, his fashion sense and his dancing. Check out the videos here:

Ok I have had enough!!!!!!!! I want to weep into my blanket ! I am the Talentless MR JOHAR according to my children! #lockdownwiththejohars

So ever since I can remember I have loved singing! Am so glad to know I have a loving audience .....#lockdownwiththejohars

I am very boring! Apparently! #lockdownwiththejohars