What Karan Johar's Biggest Fashion Critics, Roohi And Yash, Said About His Clothes

"I suppose, I have to reassess my fashion choices," said Karan Johar 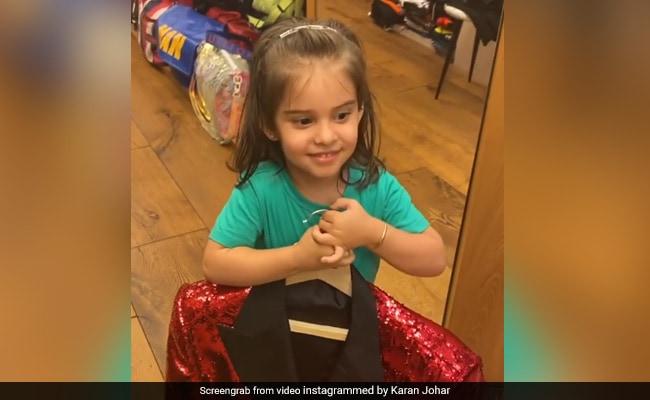 Roohi, from the video posted by Karan Johar. (courtesy karanjohar)

Karan Johar, who decided to give his kids Yash and Roohi a tour of his walk-in closet, seems to be getting too brutally honest reviews from them. Adding to his "Lockdown with the Johars" series, the 47-year-old filmmaker posted another hilarious video featuring Yash and Roohi on Thursday, where Roohi can be seen holding KJo's outfit that he wore for the Filmfare Awards. When Karan asks her, "What is it Roohi?" she says "Girls' clothes," to which KJo laughs and says, "This is not girls' clothes, this is what dada wore for Filmfare Awards." He then pans the camera to Yash who can be seen inspecting a neon outfit of Karan. When Karan asks Yash, "What is it," he just laughs, to which KJo says, "Are you laughing at dada's clothes? I suppose, I have to reassess my fashion choices." Sharing the hilarious family video, Karan wrote, "Bachche man ke sache (children true at heart) has a new meaning in my sartorial choices!"

Within minutes of posting, KJo's video was flooded with comments from his friends from the industry and also members of Yash and Roohi's fan club, including Tahira Kashyap. Preity Zinta, Ishaan Khatter, Maheep Kapoor, Huma Qureshi and others.

On Wednesday, KJo shared another video from Yash and Roohi's closet-tour diaries. When asked Roohi if she likes "dada's clothes," she promptly replied "No!" But it's Yash's response that took the cake. KJo asked him: "Yash, what should I wear?" And he said: "Simple clothes." Karan Johar laughed out loud and shared the video on Instagram with these words: "In the closet for now! And they have an opinion!"

In the closet for now!!! And they have an opinion!!! #lockdownwithejohars

Karan Johar, who is currently in his home with family due to the nationwide lockdown, keeps his Instafam amused with adorable snippets featuring his kids and mother Hiroo Johar. Take a look:

There is someone who can take away the #coronavirus

Karan Johar's kids were born via surrogacy in 2017. However, on Roohi and Yash's birthday this year, KJo shared the "actuality" of being a single parent. "I am a single parent in social status... but in actuality am definitely not... my mother so beautifully and emotionally co parents our babies with me... I could never have taken such a big decision without her solid support."