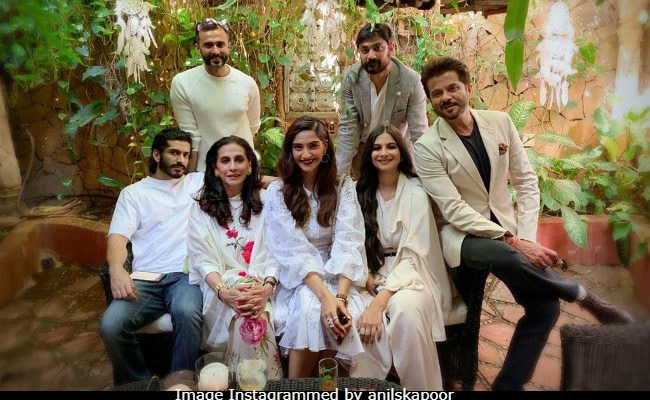 Sonam Kapoor and Anand Ahuja, who were holidaying in Bali for the New Year, returned to Mumbai just in time to celebrate the first Sunday of 2019 with the Kapoors! It was a full house at Anil Kapoor's Mumbai residence on Sunday with the Kapoor siblings joining their parents Anil Kapoor and Sunita Kapoor for a Sunday lunch. Sonam's husband Anand Ahuja couldn't have missed the get-together for the world. Guess who else we spotted at the Sunday luncheon of the Kapoors? It was Rhea's rumoured boyfriend Karan Boolani. The Kapoors are such a stylish lot - they set major Sunday brunch goals twinning in white!

Anil Kapoor, who was the first one to share a priceless family photo of the Kapoors, captioned the photo as: "A happy Sunday with the only humans that make me feel all warm and fuzzy inside... Celebrating yet another beautiful love story!" First comments poured in from Rhea and Karan, who responded with the heart emoticon. Shared on Sunday, Anil Kapoor's "happy Sunday" photo garnered over 2,27,090 'likes' in less than a day with comments like: "Amazing family" and "jhakaas" pouring in. Here's what we are talking about.

A happy Sunday with the only humans that make me feel all warm and fuzzy inside... Celebrating yet another beautiful love story! @kapoor.sunita @anandahuja @sonamkapoor @rheakapoor @karanboolani @harshvardhankapoor

Harshvardhan also added one to the family album as he roped in big sister Sonam Kapoor for a photo and captioned it as: "Sibling goals." Anand Ahuja, who closely follows the Kapoors' Instagram updates, commented: "Dope."

Lunch done, the Sonam and Rhea were spotted attending a wedding in Mumbai on Sunday night with their parents. Sonam was resplendent in a traditional lehenga choli while Rhea experimented with her lehenga, hand-picked from Anamika Khanna's collections.

On the work front, Sonam Kapoor and Anil Kapoor will soon be seen on screen together in Ek Ladki Ko Dekha Toh Aisa Laga, which releases next month. Sonam also has The Zoya Factor in the pipeline.