"Thank you so much for sending your love and blessings to our Laado on her first birthday," wrote Kapil Sharma 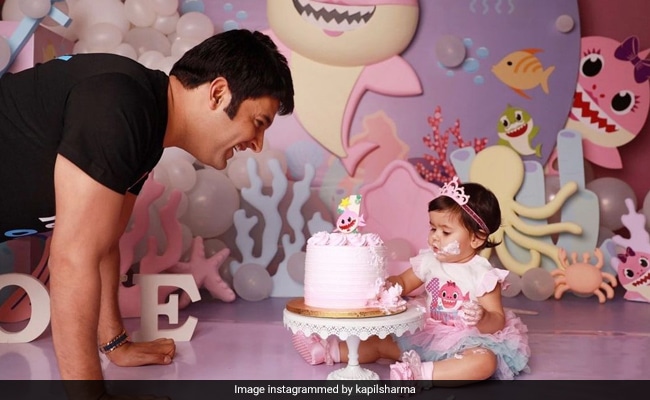 Comedian Kapil Sharma  managed to scoop some time out of his busy schedule and celebrated the first birthday of his daughter Anayra on Thursday, pictures from which he shared on his Instagram profile. In the pictures, the birthday girl can be seen wearing a frilly prink dress and cute can't even begin to describe the photographs. In one of the pictures, Kapil can be seen flashing an ear-to-ear grin as he poses with his daughter. In another picture, Kapil can be seen posing with wife Ginni Chatrath as he holds Anayra in his arms. Kapil also shared a million-dollar picture of Anayra with her grandmother. Sharing the pictures, Kapil Sharma captioned the post: "Thank you so much for sending your love and blessings to our Laado on her first birthday." He added the hashtags #gratitude, #blessings, #anayra and #happybirthdayanayra.

In December 2019, Kapil Sharma announced the news of his daughter Anayra's arrival on social media. "Blessed to have a baby girl. Need your blessings. Love you all. Jai mata di," he tweeted.

Kapil Sharma married Ginni Chatrath as per Hindu and Sikh traditions in Jalandhar in December, 2018. The couple later hosted two grand receptions - in Amritsar and in Mumbai. The Mumbai reception was a star-studded affair.

Kapil Sharma is currently seen hosting the popular television talk show The Kapil Sharma Show. He made his debut in the TV industry with The Great Indian Laughter Challenge (season 3). Kapil made his Bollywood debut with Kis Kisko Pyaar Karoon.