In a more direct attack to Richa Chadha, Rangoli said: "And here are some jobless actors, movie mafia... giving her gyan..." 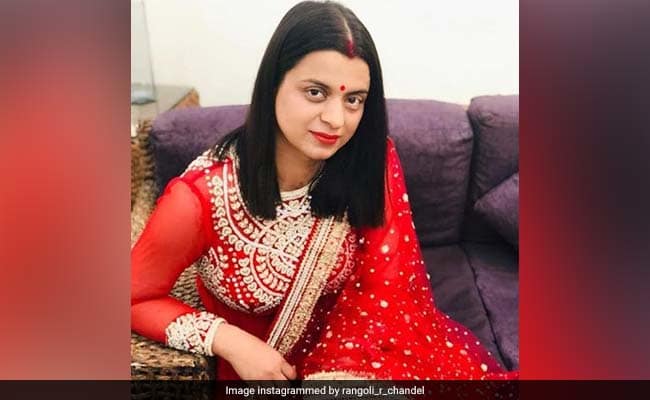 Rangoli Chandel, who often tweets in defence of her actress sister Kangana Ranaut, slammed actress Richa Chadha for her recent comments on the show By Invite Only. Speaking on the show, Richa Chadha said: "If I have a problem with someone, I wouldn't have a war of words with them on a public platform. This is because I don't want to say it. Not because I lack the courage. I have the courage and I want to say it sometimes, but I'd say it one-on-one," reported news agency IANS. Now, Richa's comments arrived amidst Kangana Ranaut and Hrithik Roshan's renewed feud, this time over a now-avoided box office clash. While Richa Chadha did not take names, Rangoli lashed out at her citing a news report, tweeting: "I hear a lot of people like Richa Chadha comment about Kangana's outspokenness, they often insist they choose not to have public war of words. My question is do they have a choice? Are they truly autonomous?"

In more of her tweets, Rangoli Chandel asserted that Kangana Ranaut's outspokenness in the past few years is a planned move, writing: "Please understand Kangana slogged for 14 years to earn her freedom," and added: "So, her timing of speaking out was also decided a decade ago." In a more direct attack to Richa Chadha, Rangoli said: "And here are some jobless actors, movie mafia... giving her gyan that even though they can but they don't indulge in public fights. Darling the truth is if you could, you would... So please take a seat." Read Rangoli Chandel's tweets here.

Hrithik Roshan and Kangana Ranaut's war of words from a few years ago was renewed when the release date of the actress' film Mental Hai Kya was rescheduled to July 26, when Hrithik's Super 30 was supposed to release. On Thursday, Hrithik tweeted he's postponing the release of his film to avoid "desecration by a media circus" and the "personal trauma and toxic mental violence" that comes with it.

While Mental Hai Kya producer Ekta Kapoor clarified that the rescheduling was her decision, Rangoli accused Hrithik of using Kangana as a "punching bag." Rangoli also laid out terms for "peace" saying Kangana would not speak against Super 30 provided she was not attacked or trolled. Meanwhile, soon after Hrithik's date change announcement, Kangana told news agency IANS: "I don't know why he wrote this sob story, but I am glad Mental Hai Kya is getting a solo release."

With due respect to everyone, if Kangana is not harmed, trolled or bullied she won't speak against Super 30 cast or its makers @SpiceSocial1 please take a note PEACE pic.twitter.com/gtcuVbsHOW

Hrithik Roshan and Kangana Ranaut featured in headlines all of 2017 for their public feud - she claimed an affair while he denied the allegations. They also exchanged legal notices asking for apologies from each other with Kangana's explosive interviews taking the Internet by storm. They are co-stars of films Kites and Krrish 3.