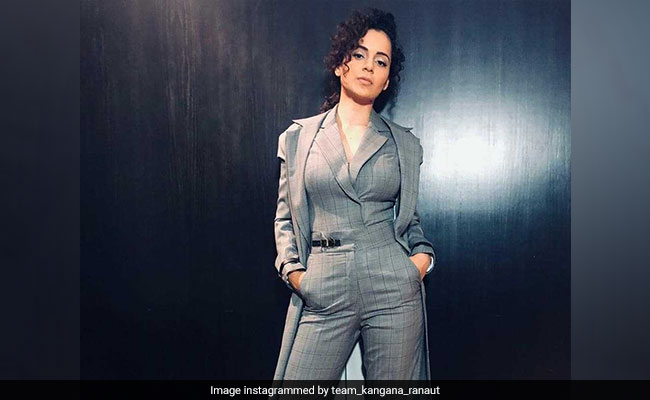 Kangana Ranaut couldn't be more "glad" that her film Mental Hai Kya will get a solo release. In a recent statement issued by the actress, Kangana called Hrithik Roshan's Super 30 date announcement a "sob story." In her statement, the 32-year-old actress stated that Ekta Kapoor and Hrithik Roshan had unanimously decided that Mental Hai Kya will release on July 26 and that Super 30's release date will be "pushed." Kangana's statement read: "Hrithik Roshan, Madhu Mentena and Ekta Kapoor had collectively decided that Hrithik would push the release date of Super 30 and Ekta will bring her film Mental Hai Kya on July 26. They had taken this call last week itself. I don't know why he wrote this sob story, but I am glad Mental Hai Kya is getting a solo release. I salute my producer Ekta Kapoor for making her way in this male-dominated industry. It's not easy to do what she does. I applaud her courage and power."

Kangana's remarks were a response to a statement issued by Hrithik Roshan on Thursday evening, in which the 45-year-old actor announced that the release of Super 30 will be rescheduled. In his statement, Hrithik also stated that his decision to postpone his film's release date was largely made in order to avoid "desecration by a media circus" and the "personal trauma and toxic mental violence."

Hrithik's statement came a day after the actor was tagged in angry tweets posted by Kangana Ranaut's sister Rangoli Chandel over the clash of his upcoming film Super 30 with Kangana's Mental Hai Kya. "So as to not allow my film to be desecrated by yet another media circus, I have decided to shift the release date of film Super 30 in order to save myself from the personal trauma and toxic mental violence this would cause. Despite the film being ready, I have requested my producers to shift and announce the next suitable date as soon as possible," read Hrithik's statement."

The controversy began after the makers of Mental Hai Kya rescheduled the release date of their film to July 26 and refused to change it to avoid clash with Hrithik Roshan's Super 30. Meanwhile, Kangana's sister and her manager Rangoli Chandel posted a series of tweets on Tuesday, wherein she tagged Hrithik and accused the actor of using Kangana as a "punching bag."

Super 30 is based on the life of Anand Kumar, who coached students from economically weaker sections for the entrance exam of Indian Institute of Technology. Hrithik plays the lead role in the film while Mental Hai Kya,

The feud between Hrithik Roshan and Kangana's made headlines in 2017, when Kangana Ranaut referred to a 'silly ex' in an interview, after which Hrithik Roshan sent the actress a legal notice and demanded an apology. The dynamics of the actors' relationship have remained the same ever since. The duo have co-starred in films such as Krissh 2 and Kites.

After much ado, Mental Hai Kya will hit the screens on July 26 while the release date of Super 30 hasn't been announced as of now.