Kangana Ranaut's Manikarnika Teaser Is A Hit On Twitter. No Room For Trolls

Kangana Ranaut will indeed make you forget blinking through the length of the Manikarnika teaser, in which she is at her feisty best 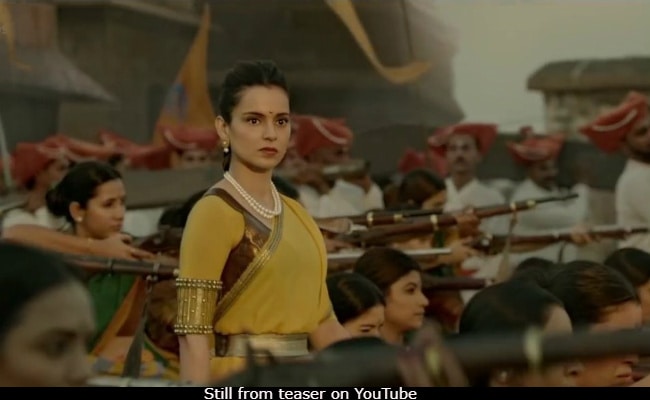 The teaser of Kangana Ranaut's Manikarnika: The Queen Of Jhansi released on Gandhi Jayanti and released to manage the difficult job of impressing Twitter. "I am watching it again and again... Hats off for taking such a great story," read a tweet while another added: "She has already won it! Hats off to you girl! A Big thumbs down to the haters!" But what haters? Twitter is mighty overwhelmed with the two-minute long teaser, in which Kangana featured in intense action sequences as the warrior queen Manikarnika. Directed by Krish, Manikarnika is the biopic of the Queen of Jhansi, who shines bright in the pages of Indian history as a significant figure of the 1857 rebellion against British Raj.

Kangana Ranaut will indeed make you forget blinking through the length of the teaser, in which she is at her feisty best. As a result, Twitter is thrilled and is getting goosebumps: "This is giving me huge goosebumps... Such a great visual treat is going to encounter the theatres. Kangana Ranaut is looking fabulous. Another magnum opus in the list of Indian history of cinema," wrote a user. "I will be watching this movie first day for sure. Loved it. Brilliant," added another tweet.

Loved the teaser: https://t.co/qBwWuUo1An#ManikarnikaTeaser I will be watching this movie first day for sure. Loved it. Brilliant. #KanganaRanaut#JhansiKiRani

#ManikarnikaTeaser is TERRIFIC Had goosebumps throughout the teaser, every scene showed such grandeur and strength of Rani Laxmi Bai #KanganaRanaut Blows my mind everytime she comes on screen, maybe her 4th national award is on the way https://t.co/WIH7VP8JPy

Loved the teaser and her fierce acting #KanganaRanaut#ManikarnikaTeaser

Powerful......
#ManikarnikaTeaser#KanganaRanaut u wer outstanding girl......
As I had often said....
It doesnt matter who is my favourite...if someone deserves appreciation thn u will get tht no matter what.....

This is EXTRAORDINARY - Stunning Visuals and Breath-Taking action sequences! #KanganaRanaut's dialogue delivery seemed to be little off-track in the teaser, but sure that it would be smooth in the film. Releases on 25th January 2019. #ManikarnikaTeaserhttps://t.co/KgL1izDPDQ

#ManikarnikaTeaser what a direction, vfx, background music, amitabh bachchan voiceover, action and above all #KanganaRanaut ....everything is just perfect

Meanwhile, there's barely room for trolls as haters have clearly been outnumbered on Twitter this time but Twitter got creative anyway:

Meanwhile, Kangana Ranaut has taken over from Krish as the director for the remaining bits of Manikarnika as he is busy with other projects. Manikarnika: The Queen Of Jhansi is slated to release on January 25, 2019.