In the latest picture, Kangana as Rani Laxmi Bai appears to be in the middle of a battle against the East India Company 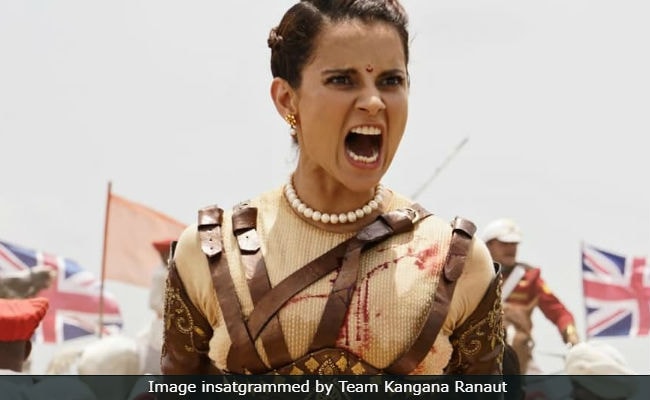 A day before the teaser of Kangana Ranaut's much-awaited Manikarnika: The Queen Of Jhansi will hit the Internet, the actress' team shared a new still from the film. In the latest picture, Kangana as Rani Laxmi Bai appears to be in the middle of a battle against the East India Company. Kangana, in a warrior get-up, looks ferocious with two blood-stained swords in her hands as she appears to challenge an opponent. The queen is ready, indeed. In addition to the new film still, Kangana's sister Rangoli Chandel also shared a picture of her sister and her son Prithvi Raj, who she says is eagerly waiting for the teaser of "his maasi's film."

Here's the latest still from Manikarnika: The Queen Of Jhansi:

And here's the picture shared by Rangoli Chandel on social media.

Over the weekend, team Manikarnika announced that the film's teaser will release on October 2, Gandhi Jayanti. In Manikarnika, Kangana Ranaut plays the role of Rani Laxmi Bai, who is counted among the early freedom fighters. She fought the East India Company valiantly to protect the kingdom of Jhansi after her husband's death.

Here's another still from Manikarnika, this time featuring Kangana as the 'Queen of Jhansi':

Manikarnika: The Queen Of Jhansi is a biopic on Rani Laxmi bai, directed by Krish. For some portions of the film, Kangana took over as director because Krish moved on to filming his next project. Kangana taking over as the film's director for few scenes featured in headlines last month. Another controversy during the filming was Sonu Sood's exit after he could assign dates to reshoot scenes because of his bearded look for another film.