Kangana Ranaut's nephew Prithvi Raj was the special guest on the sets of Manikarnika: The Queen Of Jhansi 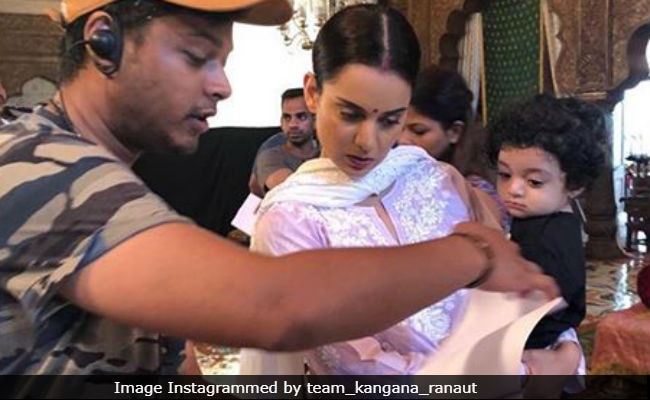 Kangana Ranuat with Prithvi Raj on the sets of Manikarnika. (Image courtesy: team_kangana_ranaut)

Guess who dropped by on the sets of Manikarnika: The Queen Of Jhansi? It was none other than Kangana Ranaut's little nephew Prithvi Raj. The oh-so-adorable picture was shared by Kangana's sister Rangoli Chandel on her Instagram profile and it was later re-posted by the verified Instagram account of the actress' team. In the picture, Prithvi Raj can be seen curled up in Kangana's arms as she reads the film's script and the expression on his face is way too cute to be missed. Rangoli captioned the picture: Manikarnika work mode! Prithvi intensely watching." Rangoli accompanied the post along with the hashtag "#massikiddieinseperable." Prithvi Raj was born to Kangana Ranaut's sister Rangoli in 2017.

Prithvi Raj frequently features in Kangana Ranaut's Instagram post. Last week, the Queen actress shared a picture of herself with Prithvi from Ganesh Chaturthi celebrations and wrote: "Cuteness overloaded!" In the picture, Kangana could be seen embracing her little munchkin as he amusingly looks at the camera.

This is not the first time that Prithvi Raj visited Kangana on the sets of Manikarnika. Last month, Kanagana's team shared an adorable video, in which Prithvi could be seen curled in Kangana's arms as she was shooting for the film's poster. The video was shared along with the caption, "The queen and her angel. Kangana Ranaut has a playful moment with nephew Prithvi while shooting for Manikarnika poster today."

Prithvi even visited his maasi on the sets of Mental Hai Kya. We got a glimpse of the picture through Kangana's stylist Brendon Degee's Instagram post, who wrote: "Look who came visiting!"