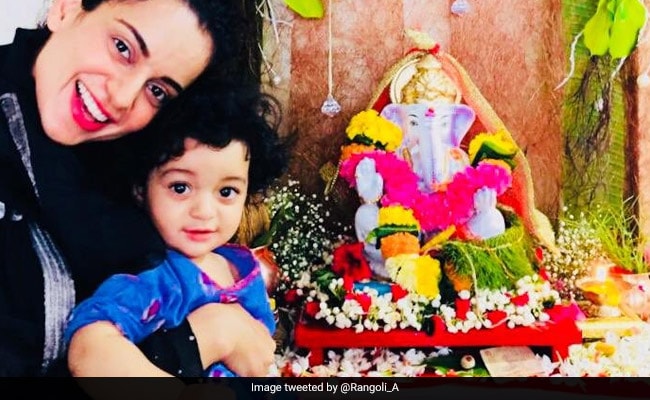 Kangana with her nephew (courtesy Rangoli_A)

Busy star Kangana Ranaut had such a cute Ganesh Chaturthi celebration! The 31-year-old actress celebrated the first day of the festival with none other than her little nephew Prithvi Raj. Kangana and Prithvi Raj's photo has been shared by the actress' sister Rangoli Chandel, who welcomed son Prithvi Raj in November 2017. "May the blessings of Shri Ganesha be with you! #HappyGaneshChaturthi #Maasiandprithu #prithusfirst #FestivalSeason #food #sweets," Rangoli wrote in her tweet. Prithvi Raj celebrates his first Ganesh Chaturthi this year. The photo of the little one with maasi Kangana is sure to set off the cuteness alarm! Prithvi Raj, who can be seen plonked on Kangana's lap, appears well aware of the camera and smiles at it. Kangana's expression too speaks a thousand words.

Baby Prithvi Raj often accompanies Kangana Ranaut in and around Mumbai. Earlier this week, the aunt-nephew duo were spotted twinning in white outside a Mumbai eatery.

Fairy tales come true look at us we have both of you !!! pic.twitter.com/IRRDcKvJ5s

Prithvi has also dropped by Kangana's work place to surprise the actress. Earlier, in a video on the verified Instagram account of the actress' team, the little munchkin was spotted curled up in Kangana's arms as she was getting ready for her shot.

Adorable photos of Kangana and Prithvi often arrive to steal our hearts on Rangoli's Twitter. Here, take a look:

As of yet, Kangana Ranaut's line up has films such as Manikarnika: The Queen Of Jhansi, Panga and Mental Hai Kya. While she's wrapped the shooting of Mental Hai Kya, in which she co-stars with Rajkummar Rao, she's currently juggling between the Rani Lakshmi Bai biopic and Panga.