This picture is way too cute to be missed 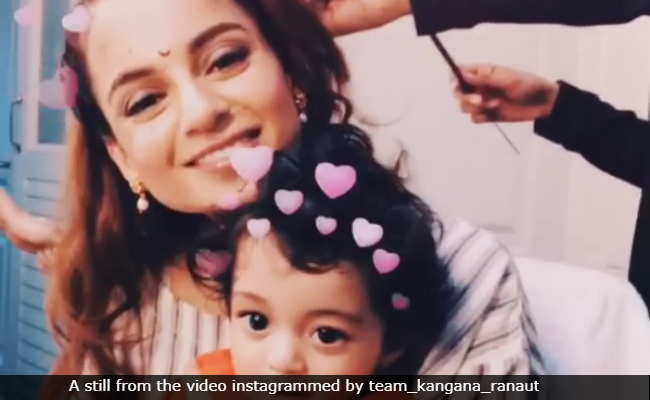 Kangana Ranaut and Prithvi on the sets of Manikarnika: The Queen Of Jhansi. (Image courtesy:

Actress Kangana Ranaut, who was busy shooting for the poster of her forthcoming film Manikarnika: The Queen of Jhansi on Tuesday, had a very special visitor on the sets of the film, who not only brought a smile to the actress' face but also brightened up our day. We are talking about Kangana's nephew Prithvi Raj. A video of Kangana Ranuat, cuddling with Prithvi was shared on the verified Instagram account of the actress' team, in which the little munchkin can be seen curled up in Kangana's arms as she gets ready for the shoot. The video was shared along with the caption, "The queen and her angel. Kangana Ranaut has a playful moment with nephew Prithvi while shooting for Manikarnika poster today. Remarks such as "cutie pie" and "adorable" were frequently seen in the comments section.

Too much cuteness in one frame.

We simply love it when Prithvi Raj makes an appearance on Kangana Ranaut's Instagram posts. Remember when he visited the sets of Mental Hai Kyain May this year? Or the picture tweeted by Kangana's sister Rangoli, where the actress and the little one can be seen sharing a kiss. Rangoli captioned the post, "Early morning kisses & cuddles."

The actress' stylist Brendon Degee shared this picture on social media and wrote: "Look who came visiting!! Kangana Ranaut gets playful with her nephew Prithvi Raj who came visiting on sets of Mental Hai Kya."

Kangana Ranaut is a dotting maasi and these pictures are proof.

On the work front, Kangana Ranaut wrapped the shooting of Mental Hai Kya, co-starring Rajkummar Rao, which is scheduled to release on February 22 next year. She also has Manikarnika: The Queen Of Jhansi in the pipeline, in which she will be seen playing the role of Rani Lakshmi Bai.