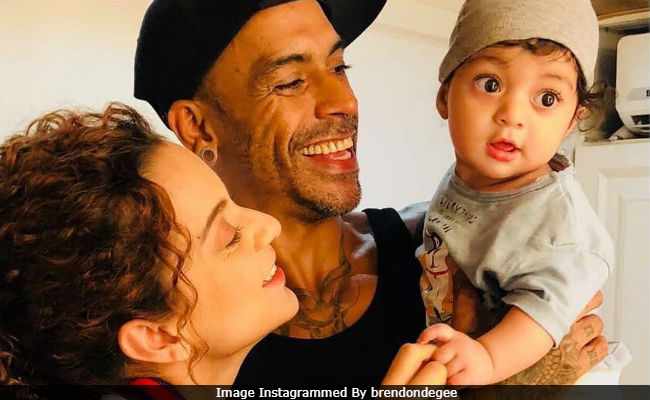 New Delhi: Actress Kangana Ranaut is a doting maasi and the several pictures with her nephew Prithvi Raj are proof. When Kangana was busy shooting for Mental Hai Kya, little Prithvi dropped by to visit her. (Can it get cuter than this?). Kangana and Prithvi's picture joyful picture has been shared by her stylist Brendon Degee. "Look who came visiting!! Kangana Ranaut gets playful with her nephew Prithvi Raj who came visiting on sets of Mental Hai Kya," he captioned the post. (Aww). Kangana just can't take her eyes off Prithvi, who is staring away the other side with his cute expressions. "Look at those eyes," read a comment.

Take a look at Kangana and Prithvi's picture.

Earlier this week, Kangana's sister Rangoli had shared another adorable picture of the actress and Prithvi Raj, sharing a kiss. "Early morning kisses & cuddles," she tweeted.

Rangoli has added several pictures of them on social media and each of them are cute beyond words.

Promoted
Listen to the latest songs, only on JioSaavn.com
Rangoli is married to businessman Ajay Chandel since 2011. They welcomed Prithvi last year in November. Rangoli is also Kangana's manager.

On the work front, Kangana Ranaut, last seen in Simran, is currently busy filming Mental Hai Kya in Mumbai. Rajkummar Rao and Amyra Dastur are her co-star in the film. Besides Mental Hai Kya, she has Manikarnika: The Queen Of Jhansi, which is a biopic on Rani Laxmibai and also stars Ankita Lokhande, Jisshu Sengupta, Sonu Sood and Atul Kulkarni. Manikarnika: The Queen Of Jhansi is expected to release in August.