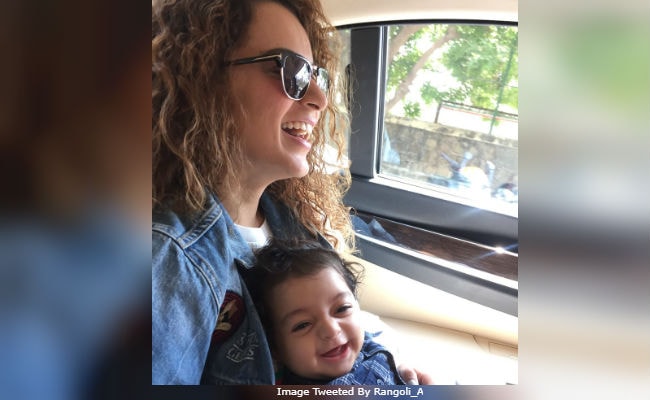 New Delhi: Actress Kangana Ranaut and nephew Prithvi Raj's picture is the cutest thing you will see on the Internet today. It has been shared by Kangana's elder sister Rangoli and has been captioned as, "On a sunshine day." In the picture, a super happy Prithvi is seated on his maasi Kangana's lap. The actress too wears a beautiful smile. Rangoli has also shared two other pictures with Kangana. In one of them, both the sisters are seen having lunch with the family while in the other picture is dedicated to Kangana and Prithvi. "Priceless smiles" and "adorable" are some of the comments posted on their picture.

Here are the other pictures Rangoli shared.

When nobody wants a picture and you are the only one trying to make it happen pic.twitter.com/gqAufLnUdx

On Kangana's 31st birthday (March 23), Rangoli shared the actress' picture of gardening in her home. "On her birthday our little Queen gifts herself a greener planet. May you live long and live a beautiful life," she wrote.

Promoted
Listen to the latest songs, only on JioSaavn.com
Rangoli is married to businessman Ajay Chandel since 2011. The couple welcomed Prithvi in November 2017. Rangoli is also Kangana's manager. Last year, Rangoli Chandel trended on and off for her tweets for defending Kangana in the controversies involving actors Hrithik Roshan and Aditya Pancholi. Kangana Ranaut recently featured in headlines after her name popped up in the Call Detail Record (CDR) scam.

Kangana Ranaut was last seen in Simran and she is currently filming Manikarnika - The Queen of Jhansi, which she also produces. She also has Mental Hai Kya, opposite Rajkummar Rao, in the pipeline.