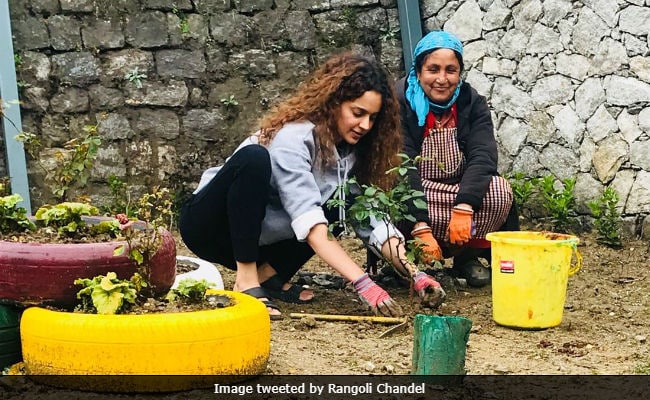 New Delhi: Actress Kangana Ranaut is celebrating her birthday in Manali in her new home with her family and friends. Kangana's sister Rangoli, who is quite active on Twitter, shared a glimpse of Kangana busy gardening in her home on her birthday. "On her birthday our little Queen gifts herself a greener planet. May you live long and live a beautiful life," Rangoli captioned the picture. In the photo, Kangana, dressed in track pants and sweatshirt, happily plants a new sapling with some help. The actress reportedly planted 31 trees in the past week to mark her 31st birthday, today. Kangana reportedly plans to celebrate her birthday by gardening, taking piano lessons and an elaborate lunch with her family.

Kangana is all set to celebrate her birthday at a go-green drive. pic.twitter.com/0JT3Ip6ayS

Kangana planted 31 trees in the past week to mark her 31st birthday. The actress will spend a quite day with friends and family in Manali today #HappyBirthdayKanganapic.twitter.com/3eVJ4QToGv

Kangana on her birthday plans: "It is going to be like any other day here. I will be gardening and having my piano classes. My family has planned an elaborate lunch, though I don't like to eat much." #HappyBirthdayKangana

Kangana Ranaut arrived in Manali a few days after attending an event in New Delhi, where she met Prime Minister Narendra Modi. Rangoli had shared a picture from the family's "proud moment":

Proud moment for the whole family!!#KanganaRanaut#PMModipic.twitter.com/55oHcC2Tlb

Kangana Ranaut recently featured in headlines after her name cropped up in the Call Detail Record scam after the police checked the mobile phone of arrested lawyer Rizwan Siddiqui. Mr Siddiqui has represented Kangana Ranaut in her case against actor Hrithik Roshan, with whom she alleges a past romantic relationship. Jackie Shroff's wife Ayesha and Nawazuddin Shiddiqui's names also cropped up in the CDR scam.

Kangana and her family recently moved into a fabulous mansion in Manali, which is settled in the lap of a picturesque valley. From the pictures of the exteriors, which have been circulating on the Internet from January, Kangana's home appears to be blend modern amenities with a typical hill station like home.

Here are some pictures of Kangana's Manali mansion:

Kangana Ranaut is the star of films such as Fashion, Queen and the Tanu Weds Manu films. The actress has won three National awards in a career spanning 12 years.

Kangana was last seen in Hansal Mehta's Simran and she is currently filming Manikarnika - The Queen of Jhansi, which she also produces. Kangana has also signed up for Mental Hai Kya opposite Rajkummar Rao.
Comments
kangana ranautkangana birthdaykangana manali home pics