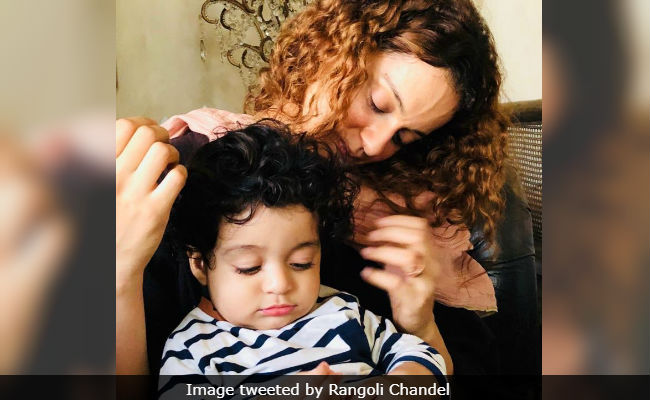 Guess what Rangoli Chandel's mother-in-law calls her toddler grandson? "Choti Kangana," the actress' sister revealed in a Twitter post on Wednesday. Actress Kangana Ranaut's nephew Prithvi Raj has indeed inherited his aunt's curly hair, which is probably the basis of the comparison. Kangana, who dotes on her little nephew, wouldn't mind it one bit. Kangana Ranaut' sister Rangoli is quite active on social media and frequently shares pictures of Kangana and Prithvi Raj with the hashtags #kiddieandmasi or #kiddiemasidiaries. In fact, during the filming of Manikarnika: The Queen Of Jhansi, Prithvi Raj frequently dropped by on the sets when Kangana was filming.

And here are some photos from the aforementioned "#kiddiemasidiaries":

Rangoli Chandel, an acid attack survivor married business Ajay Chandel in 2011 and Prithvi Raj is their first child. Rangoli is also Kangana's manager; however, during her pregnancy she took a sabbatical of sorts.

On the work front, Kangana Ranaut is currently awaiting the release of Manikarnika: The Queen Of Jhansi, a biopic on Rani Laxmi Bai. Kangana, who is also producing the film through her Manikarnika Films, recently wrapped the film's shoot and ended with a party with her colleagues.

In Manikarnika, Kangana will depict the story of Rani Laxmi Bai's fight against the East India Company, which was hell-bent on usurping Jhansi after the death of her husband Raja Gangadhar Rao Newalkar.

Manikarnika: The Queen Of Jhansi releases in January 2019 on the same day as Super 30, starring Hrithik Roshan.