Kangana Ranaut On Priyanka Chopra's Reported Engagement: 'Spoke To Her, She Seems Excited' 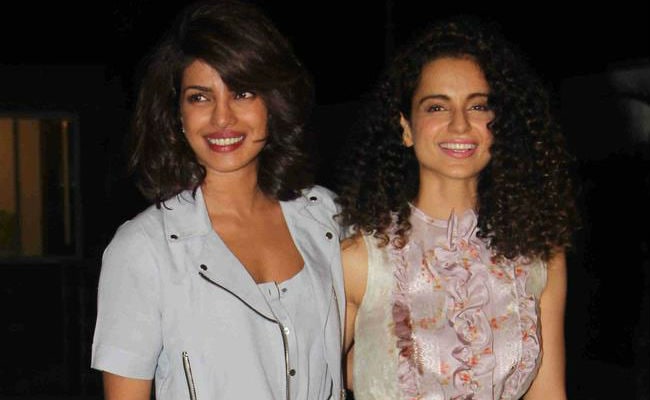 Actress Kangana Ranaut says that she spoke to her Fashion co-star Priyanka Chopra to congratulate her after the reports of her engagement with rumoured boyfriend Nick Jonas spread like wildfire on the Internet. Kangana said Priyanka "seemed excited and happy" but she neither confirmed nor denied if the rumours are actually true. Speaking to the reports at a fashion award show on Tuesday, Kangana said: "I spoke to Priyanka the other day and I congratulated her. She responded in a very... She seems excited and very happy. If such an event is taking place, I'd love to celebrate with her because she is lovely and she deserves all the happiness. She is a very dear friend. I get very happy and excited with weddings and engagements," reports news agency PTI.

On Friday, the news of Priyanka quitting Salman Khan's Bharat and the reports of her engagement to Nick Jonas broke in quick succession. In his farewell tweet (of sorts) for Priyanka, Bharat director Ali Abbas Zafar hinted that Priyanka's exit could have a Nick Jonas connection, after which People Magazine and E! reported that Nick Jonas and Priyanka Chopra have been engaged for over a week - Nick reportedly proposed to her on her birthday (July 18).

A day later, several web portals reported that Priyanka Chopra and Nick Jonas are getting married in September. However, when Kangana was asked if Priyanka confirmed the wedding date to her, the Rangoon actress said, "Not to me."

The rumoured Jonas-Chopra wedding is not the only reason cited for Priyanka's exit from Salman Khan's film. On Tuesday, The Hollywood Reporter announced that Priyanka Chopra has signed a Hollywood project opposite Jurassic World star Chris Pratt. Priyanka is reportedly onboard Universal Pictures' Cowboy Ninja Viking. Chris Pratt shot to fame after starring in the Guardians Of The Galaxy film series, in which he played the role of Peter Quill aka Star-Lord.

Meanwhile, Priyanka Chopra is returning to Bollywood with Shonali Bose's The Sky Is Pink.