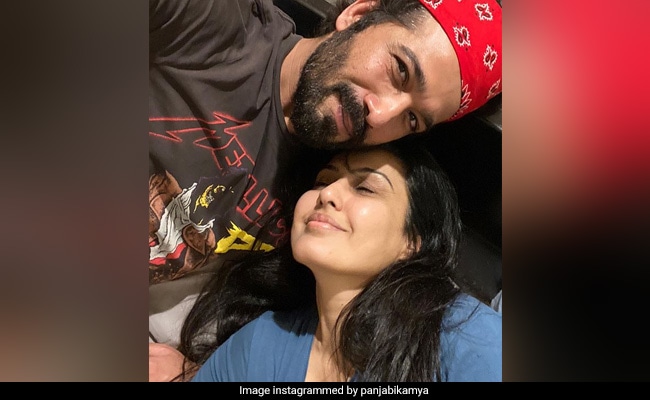 Kamya Panjabi painted Instagram red with her mushy post for husband Shalabh Dang. The actress, who often shares loved-up pictures of herself and her husband on social media, added one more photo to their family album on Wednesday. Kamya posted a really cute photograph, in which she can be seen resting her head on Shalabh Dang's shoulder as he looks at the camera. Not just the picture but Kamya's caption also made her fans go aww. Sharing the picture, Kamya called Shalabh Dang her "comfort zone" and added a heart emoji in the caption. Within an hour, Shalabh dropped an adorable comment on his wife's post.

He wrote: "Love to see you happy. Your comfort gives me the feeling of accomplishment. Love you and love to take care of you."

And here's what Shalabh Dang commented:

In one of her previous posts, Kamya gave us glimpses of her "post workout nautanki" with husband Shalabh. Cute, nah?

Kamya Panjabi was previously married to businessman Bunty Negi, with whom she has a 10-year-old daughter. The actress met Shalabh through a friend in February last year and after dating for over six months, the duo announced their wedding details in an adorable post on November 21.

Kamya Panjabi has featured in a number of daily soaps such as Banoo Main Teri Dulhann,Parvarrish - Kuchh Khattee Kuchh Meethi and Maryada: Lekin Kab Tak? She has also participated in the seventh season of reality show Bigg Boss.