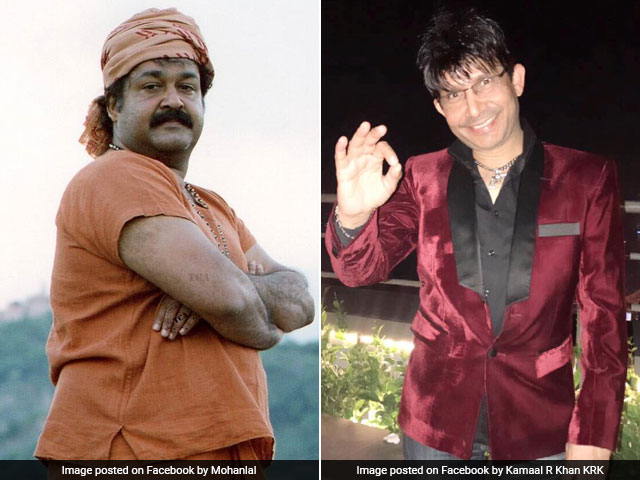 New Delhi: Kamaal R Khan really loves Twitter but the feeling is not mutual. Self-proclaimed actor, producer and movie critic KRK has been massively slammed on Twitter for posting offensive tweets about Malayalam actor Mohanlal, in which he referred to the 56-year-old actor as "chhota Bheem" and "joker." "People please see this chhota Bheem. It will be a biggest insult of Bheem if this joker plays role of greatest Bheem," KRK tweeted on Tuesday along with a picture of Mohanlal, who has been cast in the central role in a 1,000 crore film adaptation of The Mahabharata to be told through the viewpoint of Bheem. KRK, being KRK, was unmoved by the tremendous outpouring of fury his tweets provoked, and continued to post defences of himself, even calling himself a "bigger star."

Sir @Mohanlal you look like Chota Bheem so then how will u play role of Bheem in Mahabharata? Why do you want to waste money of B R shetty?

Can't understand why Malayali ppl r abusing me since morning? M I wrong abut Mohanlal who is not equal 2Hathiyar of Bheem n wants 2play him?

So if I called you Chota Bheem what you are really, then why are ur fans abusing me since morning? It's not fair sir https://t.co/Q4OEFo2mqI

U idiot fans of @Mohanlal Aka Laalten Aka Chota Bheem, he has 1.7million follower n I have 3.7million. Calculate to know who is bigger star.

KRK's pick to play Bheem in the mega-buck film - Baahubali actor Prabhas, who he named along with a hypothetical dream cast including himself as Lord Krishna. Prabhas' Baahubali co-star gets to be Duryodhan in KRK'S imaginary version of the ambitious film while Aamir Khan and Shah Rukh Khan, no less, are his choices for Arjun and Karan.

Meanwhile, fans of Mohanlal said that they were unaware of KRK's existence till his tweets about the actor brought him to public attention.

@kamaalrkhan Before Your Comment about Mohan Lal, We Malayalees didnt even Know Your Name. You should thank Mohanlal for making you famous in South India

Who is this person called KRK ? Where was he before? Never heard of him before. Was he watching Chotta Bheem & eating lollipops at his home?

There has been no response from Mohanlal to the tweets but KRK urged the actor to keep his fans in check for trolling him. "So, if I called you chhota Bheem, what you are really, then why are your fans abusing me since morning? It's not fair, sir," read of KRK's tweets.

Promoted
Listen to the latest songs, only on JioSaavn.com
Mohanlal's fans might not know who Kamaal R Khan is but actors like Sonakshi Sinha, Parineeti Chopra and Lisa Haydon, who have been the subjects of unsolicited and offensive tweets posted by him, certainly do. Last year, he was the fulcrum of a "Bollywood-style" war after claiming in a recorded conversation that Karan Johar paid him paid him Rs 25 lakhs to tweet in favour of his film Ae Dil Hai Mushkil instead of Ajay Devgn's Shivaay. Both films released on Diwali last year. KRK later retracted.

The grand Mahabharata project will be financed by UAE-based businessman B R Shetty and will release in six languages and be dubbed in more. Like Baahubali, two parts have been planned and the first will go on floors in 2018. It is expected to hit screens in 2020.