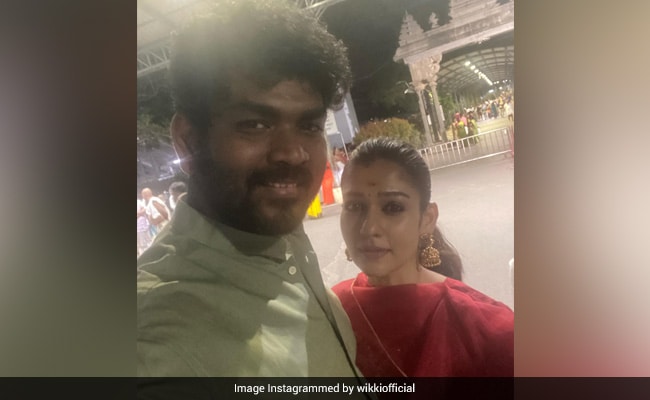 On Thursday, Vignesh Shivan shared a lovely photo with his girlfriend and actress Nayanthara. The couple visited the Thirupathi temple to seek blessings before the release of their film Kaathu Vaakula Rendu Kaadhal. The film released in cinemas today. Sharing a photo from the temple, Vignesh Shivan wrote, "Reporting from Thirupathi at 2.22 #kaathuvaakularendukaadhal is all yours from today!" For the temple visit, Nayanthara wore a pretty red Indian outfit. Kaathu Vaakula Rendu Kaadhal has been directed by Vignesh Shivan and apart from Nayanthara, it also has Samantha Ruth Prabhu and Vijay Sethupathi in key roles. The film has been produced by Rowdy Pictures and Seven Screen Studios.

On Wednesday, Vignesh Shivan had shared BTS from the sets of Kaathu Vaakula Rendu Kaadhaland Nayanthara and Samantha Ruth Prabhu's expressions were not to be missed. Vignesh had captioned the photo as "KaathuVaakulaRenduKaadhal from Tomorrow! Wanted this film to come to theatres only to see you all enjoy the super skills of @actorvijaysethupathias Rambo! The always amazing #Nayanthara my thangam as #Kanmani & the sparkling Samantha @samantharuthprabhuoffl as #Khatija! I would like to thank these actors for making my life so easy in making this film !! The energy on sets when all of them were there is something I will miss !! The moments! This experience will stay with me for a long time! Enjoy them in theatres nearby!"

The film is getting released on Samantha Ruth Prabhu's birthday. Kaathu Vaakula Rendu Kaadhalis based on a love triangle and also has former cricketer Sreesanth in a key role.