"If everything around you seems dark, look again, you may be the light," Ananya captioned her photos 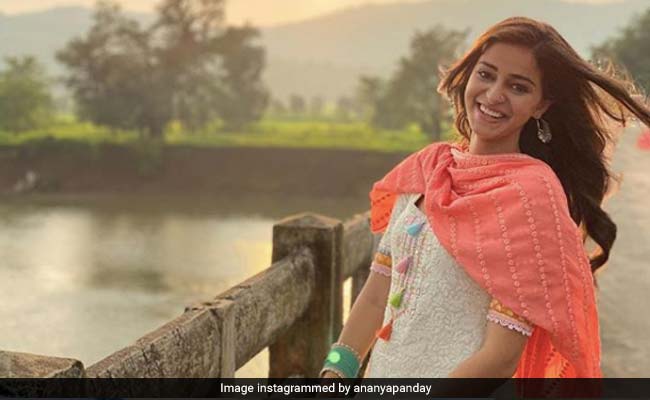 Khaali Peeli co-stars Ananya Panday and Ishaan Khatter make for a super fun duo. Ananya and Ishaan co-star for the first time in Khaali Peeli and their on screen chemistry often translates into their off screen shenanigans - there's proof in Ananya's latest Instagram post. The 21-year-old actress shared a few photos from the film's sets with a beautiful caption that said: "If everything around you seems dark, look again, you may be the light." She assigned photo courtesy to Ishaan Khatter, also describing herself as "always LOL". Ananya Panday is such a happy-go-lucky soul and these photos are proof. Well done, Ishaan Khatter.

if everything around you seems dark, look again, you may be the LIGHT ☀️ @ishaankhatter 📸 (always lol) #KhaaliPeeli 🚕

In a recent post, referring to her character from Khaali Peeli, Ananya said that: "I miss playing Pooja already." But that's not the only thing she thinks about from her shoot days: "And doing random photo shoots in the middle of intense action sequences," she added.

I miss playing Pooja already and doing random photo shoots in the middle of intense action sequences 🥺 #TakeMeBack #KhaaliPeeli 💛 (also the teaser link is in my bio so pls go watch it!! 🤪)

Ishaan Khatter also often adds to Khaali Peeli diaries with photos like this:

The teaser of Khaali Peeli released last month and Khaali Peeli turned out to be a promising comedy. Directed by Maqbool Khan, Khaali Peeli is produced by Ali Abbas Zafar, who said in a statement, "Khaali Peeli is a complete desi entertainer. Ishaan, Ananya's energetic chemistry and Jaideep's (actor Jaideep Ahlawat) credibility makes this ride cooler and edgier." The film tracks the story of a dancer (Ananya's Pooja), who bumps into Ishaan's character, a cabbie, while running away after a theft job.

Khaali Peeli is expected to hit the screens next year.