"It was funny but a sweet memory that remained with me as a special memory," said Juhi Chawla 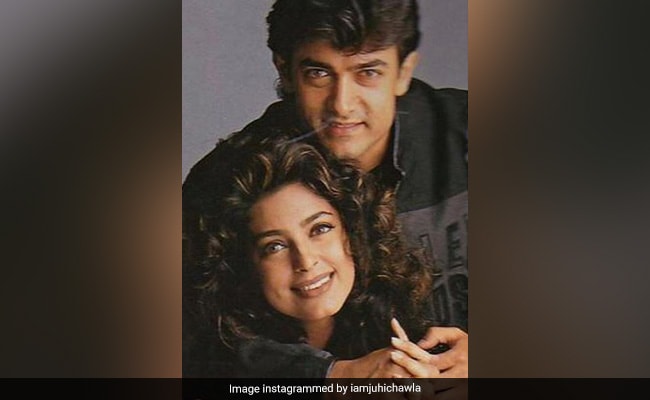 Actress Juhi Chawla, who turned 52 on Wednesday, revealed in an interview to Hindustan Times what her friend Aamir Khan gave her as a birthday gift on the sets of the 1994 film Andaz Apna Apna. Don't get your hopes up as it was just a "small chocolate." Yes! The actress told the publication that she was "excited" when Aamir Khan brought a gift for her but her excitement soon turned into surprise when Aamir "took out a small chocolate" and gave her as the gift. Juhi Chawla appeared in a cameo role in the cult comedy, which also featured Salman Khan, Karisma Kapoor and Raveena Tandon in the lead roles.

Recalling the "funny but sweet memory" from the film's set, Juhi told Hindustan Times: "Aamir came over to wish me and said, 'I have got a gift for you.' I was super excited and he took out a small chocolate and gave me... I was like what? This is the gift. It was funny but a sweet memory that remained with me as a special memory."

Andaz Apna Apna is really an iconic film with hilarious scenes. In one of the funny sequences, Amar (played by Aamir) dreams of romancing film star Juhi Chawla (who featured as herself in the film). Other than Andaz Apna Apna, Aamir Khan and Juhi Chawla have co-starred in films like Qayamat Se Qayamat Tak, Daulat Ki Jung, Love Love Love, Tum Mere Ho, Aatank Hi Aatank, Hum Hain Rahi Pyar Ke and Ishq among others.