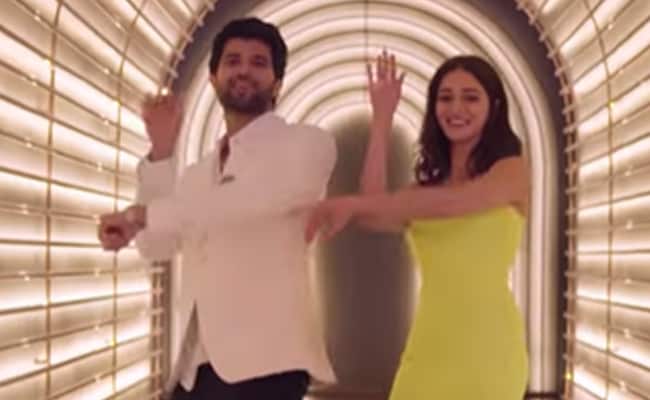 Jug Jugg Jeeyo, which is Dharma Productions' latest offering, has taken social media by storm with its trailer and now, the first song from the film, The Punjaabban Song. Among several others, the dance number also has two high profile fans in Vijay Deverakonda and Ananya Panday. The two young actors who will be seen in Liger, another Dharma Productions film, have been caught on camera grooving to the banger song. The clip of the co-stars dancing has been shared by Ananya on Instagram and features the two stars performing the hook step of the track in perfect synchrony. Sharing the post, Ananya wrote, “Hooked to this step and the vibe of this song! As they say - Jug Jugg Jeeyo to the team and all our love for the film from Team Liger.”

While Ananya Panday is dressed in a yellow bodysuit and purple heels, Vijay Deverakonda looks dapper in a black and white suit in the fun post. Watch the video here:

Ananya Panday reshared the video on Instagram Stories and wrote, “From team Liger to the Jug Jugg Jeeyo fam,” with a heart emoji. Even before its release, The Punjaabban Song made headlines after its original creator, Pakistani singer-politician Abrar-Ul-Haq accused producer-filmmaker Karan Johar of using the song without acquiring the rights. In a tweet, he said, “I have not sold my song “Nach Punjaban” to any Indian movie and reserve the rights to go to court to claim damages. Producers like Karan Johar should not use copy songs. This is my 6th song being copied which will not be allowed at all.”

I have not sold my song “ Nach Punjaban” to any Indian movie and reserve the rights to go to court to claim damages. Producers like @karanjohar should not use copy songs. This is my 6th song being copied which will not be allowed at all.@DharmaMovies@karanjohar

However, T-series soon released a statement refuting the singer's claims. "We have legally acquired the rights to adapt the song Nach Punjaban from the album Nach Punjaban released on iTunes on January 1, 2002, and is also available on Lollywood Classics' YouTube channel, owned and operated by Moviebox Records Label, for the film Jug Jugg Jeeyo produced by Dharma Productions,” the tweet said.

We have legally acquired the rights to adapt the song #NachPunjaban released on iTunes on 1st January, 2002 & available on Lollywood Classics' YouTube channel, owned by @1Moviebox, for #JugJuggJeeyo produced by @DharmaMovies. The song is available here: https://t.co/2oLFzsLAFIpic.twitter.com/t6u3p3RA6z

This was also backed by Moviebox Birmingham Limited,  to whom the song was licensed at the time of T-Series acquiring the rights. It noted, “Nach Panjaban has been officially licensed for it to be included in the film Jug Jugg Jeeyo by T-Series. Karan Johar and Dharma Movies have the legal rights to use this song in their film and the tweet by Abrar-Ul-Haq earlier today is defamatory and completely unacceptable,” the company's tweet said.

This song has been officially licensed by @TSeries. @karanjohar & @DharmaMovies have the legal rights to use this song in their film and this tweet by @AbrarUlHaqPK is defamatory and completely unacceptable.

In the song released on Sunday, Abrar-Ul-Haq has been credited with "original music and lyrics". Sharing a teaser of the song, producer Karan Johar said, “It's time to get the family together and groove to this ultimate track.”