"I think we are both busy now but every time we meet, there is that warmth," said Janhvi Kapoor 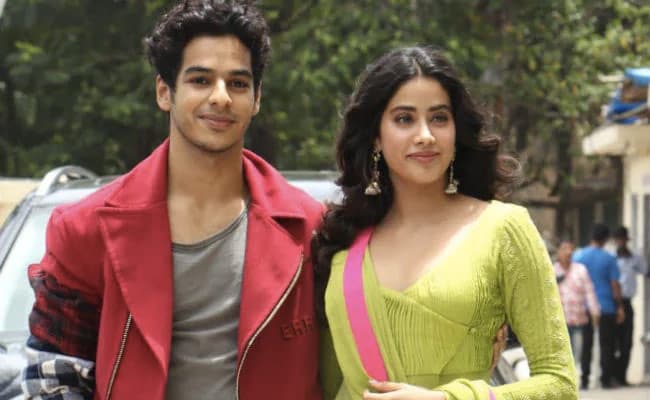 A throwback picture of Janhvi Kapoor and Ishaan Khatter.

Janhvi Kapoor was recently asked in an interview with RJ Siddharth Kannan if she's still in touch with her Dhadak co-star Ishaan Khatter. Janhvi, who dated the actor for a while, said, "I think we are both busy now but every time we meet, there is that warmth." She added, "Rangsaari, the song that came out from JuggJugg Jeeyo, that song was supposed to be in Dhadak. So every time we'd shoot montages for Dhadak, we'd play that song. When it came out, both of us felt like this was our song and it made us feel so much. We texted each other, 'Did you see it?' It felt kind of funny."

Janhvi Kapoor, daughter of late actor Sridevi and film producer Boney Kapoor, was last seen in the horror comedy Roohi, with Rajkummar Rao and Varun Sharma. Her line-up of film includes comedy Dostana 2, which was meant to star Kartik Aaryan earlier. The film's revised cast has not been announced as of now. She will also be seen in Mili and Bawaal, in which she will co-star with Varun Dhawan. Her film GoodLuck Jerry released today.

Ishaan Khatter, son of actors Rajesh Khattar and Neelima Azeem, made his acting debut with Beyond The Clouds, which was directed by Majid Majidi. He then starred in Dharma Productions' Dhadak in 2018, which marked the debut of late actor Sridevi's daughter Janhvi Kapoor. He was last seen in Khaali Peeli with ex-girlfriend Ananya Panday. He also featured in Mira Nair's web-series A Suitable Boy, co-starring Tabu. He will soon feature in Phone Bhoot with Katrina Kaif and Siddhant Chaturvedi.