"I Felt Like I Was Home": Jaideep Ahlawat Shares An Emotional Post After Visiting Irrfan Khan's Family 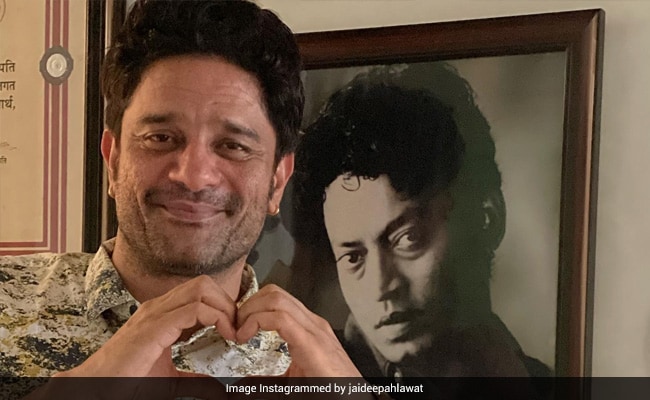 Irrfan Khan, one of Bollywood's finest actors, died in 2020 after a prolonged battle with cancer. Years after his death, Irrfan Khan continues to rule the hearts of his fans and colleagues. It is not uncommon to find innumerable fan posts as well as heartwarming notes from former co-stars on social media celebrating Irrfan Khan – the man and the artist. The latest on the list is a moving Instagram post from actor Jaideep Ahlawat who visited the late actor's home. On Wednesday, Jaideep shared a bunch of images from his visit and penned a warm note dedicated to Irrfan Khan. In one of the images, the actor is seen sitting on the floor of the house surrounded by rows and rows of mangoes.

In the other images, Jaideep Ahlawat is posing with a photo of the late actor. That's not all. He even shared an image of the book – Irrfan: Dialogues With The Wind, written by filmmaker Anup Singh, released in February this year.

Along with it, Jaideep has also shared a photo of a note written on the first page of the said book, presumably by Irrfan Khan's wife Sutapa Sikdar. The message reads: “28th June, 22. To Jaideep, may you always shine and have the wind in your wings. Be the change. Blessings and love always." The note was signed, "Sutapa Irrfan Babil Ayaan.”

In the caption, Jaideep Ahlawat further wrote, “Thank you so so much, Sutapa Sikdar ma'am for everything…I felt like I was home. We see you soon bro, Babil Khan. Love you.”

On Tuesday, Sutapa Sikdar shared a video of the fresh produce from her late husband's mango farm. In the note she said, “In this journey called life you are always close to your close ones but if your journey has extended beyond the lifespan but you can be alive if you had decided to be part of mother nature in your life span. Mango farm by Irrfan, of Irrfan was an extension of him and his calling' organic farming'. It is again that part of the year when mangoes blessed with his love reached us. He loved sitting on this chair and devour them. He loved mangoes and I could fool with rubbish cooking if it ended with mangoes.”

Meanwhile, on the work front, Jaideep Ahlawat was last seen in the web series The Broken News. He will soon share the screen with Kareena Kapoor in Sujoy Ghosh's upcoming project.

Irrfan Khan's son Babil Khan is soon to make his debut in Netflix's Qala with Tripti Dimri. He is also part of the Yash Raj Films digital series The Railway Men with actors such as R Madhavan, Kay Kay Menon, and Divyenndu Sharma.