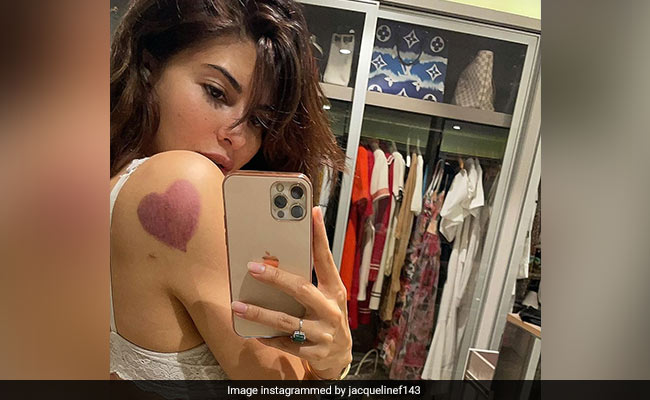 Actress Jacqueline Fernandez just sent the Internet into a tizzy with a very cool picture of herself. The 35-year-old actress who tried out cupping physical therapy shared a picture of the beautiful mark that the therapy left on her shoulder. Jacqueline Fernandez shared the picture on Instagram. In the picture, she can be seen clicking a mirror selfie as she shows off the red heart shaped mark on her shoulder. The actress can be seen sporting a stunning cream bralette in the picture. Seems like the cupping therapy impressed Jacqueline as she wrote: "I'm hooked," in the caption of the post. She also tagged her physiotherapist in the caption and added a heart and a kissing emoji along with it.

Jacqueline's post left many fans thinking that she got a tattoo. The actress' comments section was flooded with compliments from her fans. "This picture, OMG, you cutie," a fan commented on the post. Most of the fans chose to drop heart and fire emojis in the comments section.

Jacqueline Fernandez has a pretty interesting Instagram feed. She keeps sharing her selfies, pictures from photo shoots and also glimpses of her workout schedule. Jacqueline is a "yoga girl," and she keeps sharing pictures from her yoga sessions on Instagram. The actress gave us a peek into her fitness regime last month. She had a couple of posts that captured her performing some yoga asanas. "Yoga girl forever," she wrote in the caption of the post.

Jacqueline's love for yoga is known to all. Here are some more posts of the actress performing yoga.

Jacqueline currently has some impressive projects lined up including Bachchan Pandey co-starring Akshay Kumar and Kriti Sanon. She will also be featuring in Attack co-starring John Abraham. Jacqueline is also a part of Rohit Shetty's Cirkus.