"Grateful to seek blessings in the Holy land of Ayodhya for #RamSetu," Nushratt Bharuccha wrote in the caption 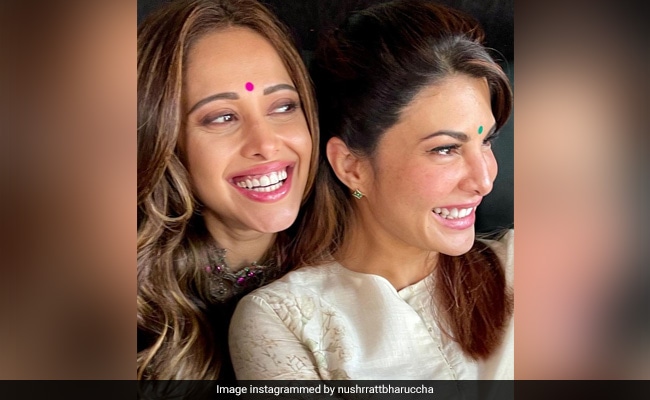 Nushratt Bharuccha, who is currently shooting in Ayodhya, Uttar Pradesh for her upcoming film Ram Setu, has shared a picture with her co-star Jacqueline Fernandez on Instagram. In the photo, Nushratt and Jacqueline are flashing their million-dollar smiles, as they seek blessings in the city. Both the actresses look beautiful in their ethnic suits. They are also sporting bindis. Nushratt and Jacqueline's Ram Setu co-star Akshay Kumar is missing from the photo, as he turned photographer for the leading ladies this time.

Nushratt's post also features her solo photo. She wrote in her caption, "Grateful to seek blessings in the Holy land of Ayodhya for #RamSetu..." See her post here:

Akshay, Nushratt and Jacqueline flew to Ayodhya on Thursday morning. The Khiladi actor posted a picture with them on Instagram earlier today and informed his fans that they have begun their Ram Setu journey. He wrote, "A special film, a special start...Team #RamSetu off to Ayodhya for the mahurat shot. And so the journey begins. Need special wishes from all you guys."

The release date of Ram Setu has not been announced yet. The film is directed by Abhishek Sharma.

Akshay Kumar and Jacqueline Fernandez have previously worked with each other in Brothers, Housefull 2 and Housefull 3. Apart from Ram Setu, Akshay and Jacqueline will also feature in the upcoming film Bachchan Pandey, which also stars Kriti Sanon.

On the other hand, Akshay will share screen space with Nushratt for the first time.