Jacqueline Fernandez always manages to give us major fitness goals 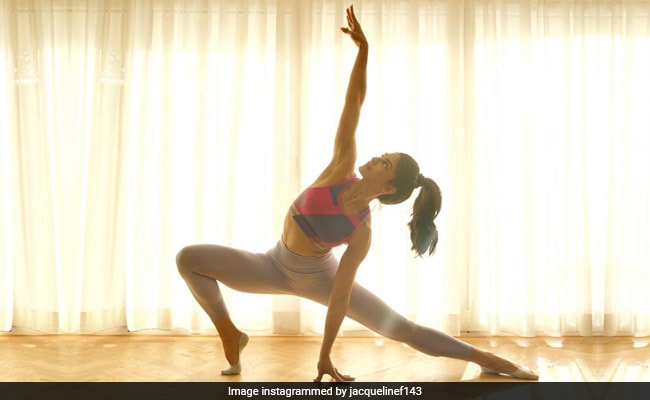 A quick glance through Jacqueline Fernandez's Instagram profile will reveal how seriously the actress takes her fitness regime. Her profile is filled up with posts from her workout diaries - be it Pilates, dance routines or her favourite fitness method - yoga. On Wednesday, the Kick actress shared a couple of posts which showcase her love for yoga. In the pictures, Jacqueline can be seen stretching out, dressed in athlesiure. She can be seen wearing a pink and grey top with a pair of track pants. "Yoga girl forever," she captioned one of her posts.

Adding another post from her yoga diaries, the actress wrote: "Breathe in breathe out..." See the other posts shared by the actress here:

Jacqueline Fernandez's love for yoga needs no introduction. Here, these posts are proof.

Jacqueline Fernandez made her debut in Bollywood with the 2009 film Aladin. She went on to feature alongside Salman Khan in several films like Kick and Race 3. The duo will once again collaborate for Kick sequel. The actress has also starred in films such as Murder 2, Race 2, Housefull 2, Housefull 3, Judwaa 2, Mrs Serial Killer and Drive to name a few.

The actress' impressive line-up of films includes Bachchan Pandey, alongside Akshay Kumar and Kriti Sanon. She has also signed Ram Setu with Akshay Kumar and Nushrratt Bharuccha. She will also be seen in Attack, opposite John Abraham. The actress will also star in Rohit Shetty's Cirkus, starring Ranveer Singh, and Bhoot Police with Saif Ali Khan, Arjun Kapoor and Yami Gautam.