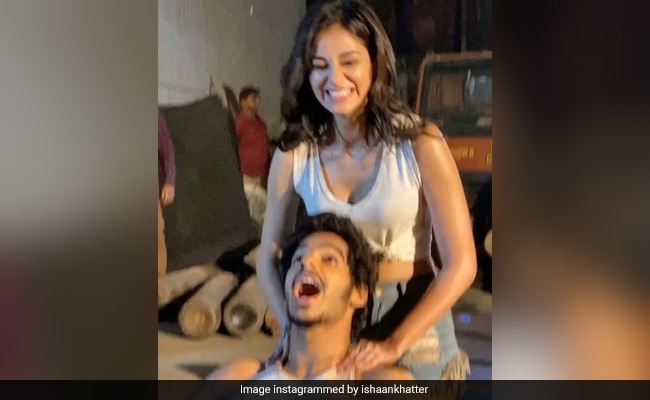 Ishaan Khatter and Ananya Panday are true professionals when it comes to work. The actors can flash the brightest of smiles even after pulling off a 24-hour-long shift (atleast that's what Ishaan's caption says). On Wednesday, Ishaan shared a slightly blurred picture on his Instagram profile but we can clearly see the actor and his Khaali Peeli co-star Ananya Panday's bright grins. The picture appears to be a BTS from the song Tehas Nehas from their upcoming film, which released on Tuesday. Ishaan, tagging Ananya Panday in his post, wrote in his caption: "Mere kandhon ko tehas nehas kar diya tune." He added, "On our 24 hour shift to finish the song."

Khaali Peeli, which is slated to release on October 2, will stream on OTT platform ZeePlex. The film showcases the journey of a taxi driver named Blackie (Ishaan), who is released from jail after serving time for "committing a half murder" and a dancer (Ananya Panday), who runs away after stealing some money, They meet in Blackie's taxi.

Ishaan Khatter, who stepped into the film industry with Beyond The Clouds, starred in the 2018 film Dhadak, opposite Janhvi Kapoor. He was also a part of Mira Nair's A Suitable Boy. The actor has also signed Phone Bhoot, alongside Katrina Kaif and Siddhant Chaturvedi.