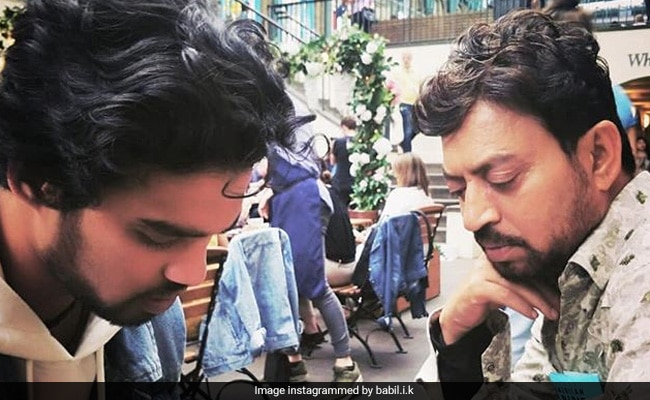 Actor Irrfan Khan's son Babil's Instagram is a treasure trove of memories, featuring the actor. On Thursday, instead of another throwback, Babil decided to post a photo of just himself, in connection with his father. Irrfan Khan and Sutapa Sikdar married in February 1995 and are parents to sons Babil and Ayan. In his post on Thursday, Babil revealed that he is often told about his resemblance to his father and in response to frequently made the observation, he shared a close-up shot of himself. The caption to his post simply read: "'Oh my god, you look just like your dad!'" Here, take a look. Irrfan Khan died in Mumbai on April 29. He was 53.

"Oh my god, you look just like your dad!"

Meanwhile, let's browse through the memories of Irrfan Khan, which Babil revisited on his Instagram page. Talking about Irrfan's fondness for rain, Babil had shared a film still from The Song Of Scorpions and written: "He had this strange understanding of rain. I cannot compare it to anything that I have ever experienced."

He had this strange understanding of rain. I cannot compare it to anything that I have ever experienced. He could only explain it to me through the limits within what words would let him, but there was a connection that I cannot envelop even in the most beautiful language; only the desert could show, oh my god, what the rain did to him.

"I thought might as well," Babil wrote for another piece of throwback gold, starring Irrfan Khan.

I thought might as well. Whenever it was farmhouse time for him, these kids and the school principal would show up to meet.

However, the best of all of Babil's throwbacks is perhaps this one, in which both he and Irrfan gave off major Lion King vibes.

Irrfan Khan was diagnosed with cancer in 2018, after which he took a break from acting as he underwent treatment in London. He returned to India for filming Angrezi Medium but didn't attend the promotions. Directed by Homi Adajania, Angrezi Medium remains Irrfan's last movie.