The Instagram profile is believed to be Babil's as it is studded with memories featuring Irrfan, posted with heartwarming captions. 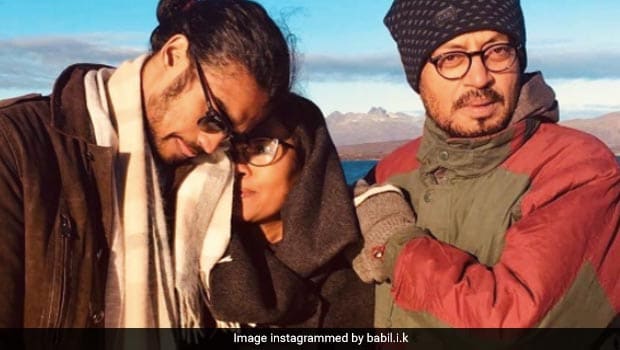 This photo of Irrfan Khan is viral now (courtesy babil.i.k)

Actor Irrfan Khan, whose death last month shocked fans across the world, is survived by his wife Sutapa and sons Babil and Ayan. After Irrfan Khan's death, the Internet identified an unverified Instagram profile as his son Babil's. The profile, which is followed by celebs such as Irrfan Khan's Angrezi Medium director Homi Adajania, Ishaan Khatter and Dia Mirza among others, is believed to be Babil's as it is studded with memories featuring Irrfan, posted with heartwarming captions. One such post arrived on May 11, a day after Mother's Day, dedicated to Sutapa: "Long live the queen. Extended Mother's Day," read the caption. But there's a priceless gem hidden behind the first photo in the post - it's one of Babil and Sutapa with Irrfan from what appears to be one of their vacation diaries.

Videos and photos of Irrfan Khan from this profile with Babil's name went crazy viral after the actor's death. In one of the videos, Irrfan can be seen taking a refreshing swim somewhere in the hills. In another video, captioned: "When you're on diet for so long and then the shoot ends and you can have pani puri," Irrfan can be seen gulping down pani puris with a very happy smile on his face.

When you're on diet for so long and then the shoot ends and you can have pani puri.

The profile also features memories such as these throwbacks featuring Babil and Irrfan Khan: "Look what I've found. If you thought I just started posing. (Lion King vibes)," said one of the captions.

Irrfan Khan, who was diagnosed with cancer in 2018, died in Mumbai on April 29. He was 53. His sons Babil and Ayan were spotted outside the hospital where he died. Angrezi Medium remains Irrfan's last movie. In her send-off note for Irrfan, his wife Sutapa wrote: "The only thing I have a grudge against him is; he has spoiled me for life."