"Love you all for all the love you give me," wrote Sunny Deol 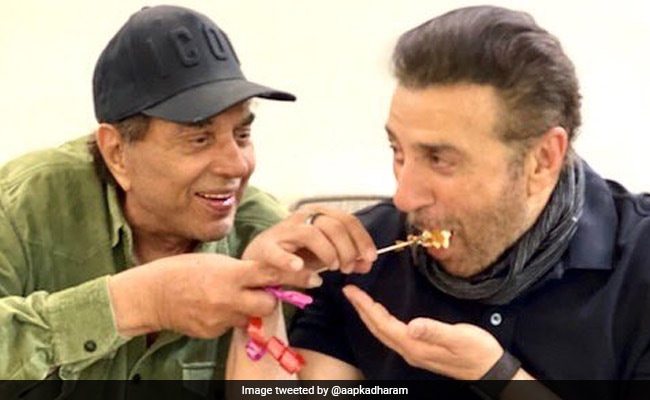 Bollywood actor Sunny Deol, who celebrates his 64th birthday today, shared a picture from his birthday festivities on his Instagram account on Monday (more on that later). The actor's fans and family members wished him on social media, sharing some of the sweetest messages for the actor. Sunny Deol's father and Bollywood veteran Dharmendra posted a picture from the celebrations on Twitter. He wrote in his note for son: "Love you all for your loving response... Your good wishes on Sunny's birthday. Friends, you are always close to our heart. Khushi mein.....aaj to intiha ho gai tweets ki...Bore ho gaiye honge aap .Ab kuchh din chup rahoonga."

Meanwhile, Sunny Deol's brother Bobby posted a picture of the birthday boy and he wrote in his note: "Happy birthday bhaiya. Happy birthday to the greatest soul! A brother, a father, a friend."

Happy birthday to the greatest soul! A brother! A Father! A Friend! @iamsunnydeol

Sunny Deol also posted a picture of himself along with his birthday cake and he wrote: "Love you all for all the love you give me," he wrote. In the comments section, Esha Deol wrote: "Happy Birthday bhaiya." Take a look at the post:

Love you all for all the love you give me.