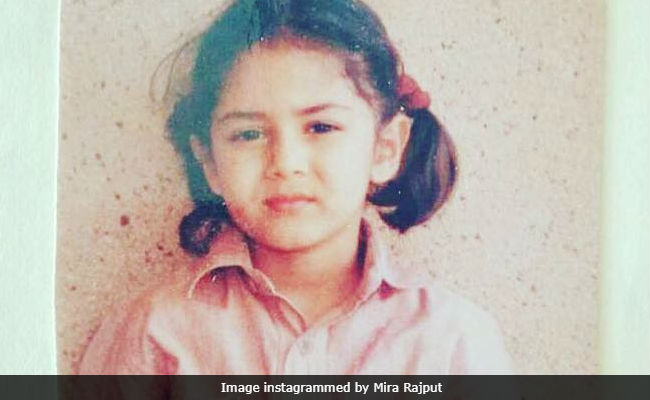 New Delhi: Actor Shahid Kapoor's wife Mira Rajput shared a "blast from the past" on her Instagram account - a picture of her young self while she was studying in New Delhi's Vasant Valley School. Settled against a wall, Mira, with her shirt untidily tucked and two ponytails (that horrible trend which scared many a childhood pictures), posed but had no smiles to give to the person clicking the picture. She looks quite cute. In comments, fans of Shahid and Mira declared that their daughter Misha is ditto like her mother. "Your daughter is your copy," said one Instagram user while another added: "Now we know where Misha is getting her looks from. So adorable."

Blast from the past #VVS

Mira has two Instagram accounts one of which is private while on the other she shares pictures of her family for Shahid Kapoor's fans, who want to know everything about him. Mira shared some pictures of her precious family moments.

Earlier, Mira had also shared this picture from her Piano recital:

Promoted
Listen to the latest songs, only on JioSaavn.com
Shahid Kapoor married Delhi girl Mira Rajput in 2015 and the couple welcomed their daughter Misha in August 2016. Shahid and Mira were introduced by their parents, who are members of the Radha Soami Satsang Beas.

Shahid Kapoor was last seen in Rangoon, which was a box office disaster. The release of his next film Padmavati has been deferred indefinitely. The Sanjay Leela Bhansali-directed film also stars Deepika Padukone and Ranveer Singh. Padmavati, which was scheduled for December 1 release, is expected to hit the screens in early 2018.